Miró's first exhibition in London for over 50 years brings an unprecedented amount of work to the Tate Modern. But can the exhibition live up to the Tate's previous successes? 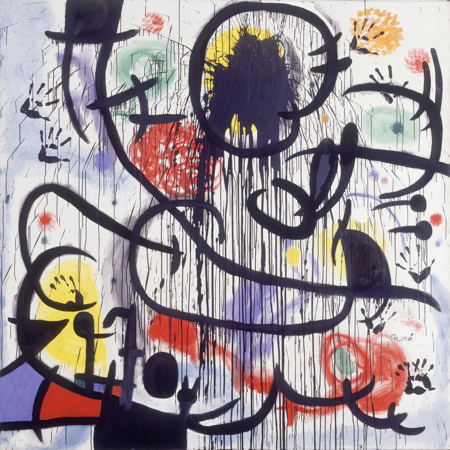 The new Joan Miró exhibition at the Tate Modern makes many bold statements. For an artist whose life traversed many of the most important events of the twentieth century it is the first to truly reflect on the historic significance of his works.

Being the first display of Miró's work to be shown in London for 50 years as well as the first to exhibit his five large scale triptychs together, the exhibition will undoubtably attract the public, aficionados and, judging by the turnout of international press at the launch, many tourists.

The runaway success of the recent Gauguin exhibition and the ongoing transformation of the surrounding areas cemented the Tate's stature as one of the world's top art galleries. This must have helped to secure to the vast amount of Miró's work assembled at the gallery.

The exhibition takes you on a journey through the life of the Catalan artist from his childhood in Barcelona through his various flights, first from the Spanish civil war then from the German invasion of France and up until his death in 1983. The artist shows a vitality in his later years uncommon for his age in reflecting the issues of the day such as the Spanish transition to democracy and student protests in his seminal piece May 68.

The exhibition is an in-depth exploration of Miró's historical context. For the passionate Miró fan it is a enlightening and revealing exploration of his work and ideas. However well intended the curation is to provide something different, the exhibition's unfortunately confines itself to catering to those who have some prior knowledge of Miró or the historical context.

One of the successful things about Tate Modern is that it has transcended the highbrow status of an art gallery and become something of a public space. Some fantastically curated exhibitions have made many artists and movements accessible to the wider general public and truly brought art to the masses.

Many people may not know the artist, but many will recognise his work not from the pieces but from his visual legacy emblazoned on countless buildings and heavily Miró-influenced design. The exhibition bears no mention to this and resigns itself to being reflective rather than reactionary which, for an artist as vibrant and reactionary as Miró seems like a shame.

It may well be that the strength of the work itself will win many people over. The sheer quantity allows the viewer to explore the artist's progression. The vast triptychs and series of over thirty prints are undoubtedly impressive and the historical context is clearly explained. This is not by any means a bad exhibition, it just lacks the accessibility of the Tate's previous offerings.