Shakespeare's Globe has named its text associate Giles Block and master of movement Glynn MacDonald as joint recipients of the 2011 Sam Wanamaker Award. 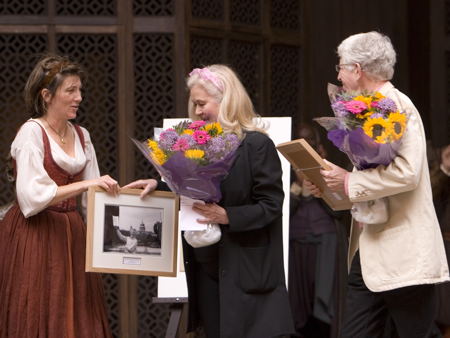 "Ask any actor what is so special about working at the Globe and they will mention the support they receive from Glynn and Giles," says Globe Education director Patrick Spottiswoode.

"Ask any of the undergraduates, graduates or teachers who study at the Globe what they treasure most about their course of study and they will invariably say 'working with Glynn and Giles'.

"Their commitment to the Globe, to Shakespeare and to sharing their particular and pioneering approaches to their craft with hundreds of actors, directors, students and teachers every year has made them two of the Globe's most valued and treasured guiding spirits."

The award, the most prestigious prize granted by the theatre, is given annually in the name of Globe founder Sam Wanamaker to celebrate work which has increased the understanding and enjoyment of Shakespeare.

Giles Block has led the text work for Globe theatre productions and Globe Education courses and productions since 1999. He also directed the Globe's Antony and Cleopatra (1999), Hamlet (2000) and Troilus and Cressida (2005).

He has been staff director and director of Platforms at the National Theatre and won an award for his services to the Japanese Theatre. Giles has also directed The Tempest, Henry V and The Comedy of Errors at the reconstructed Blackfriars Theatre in Virginia.

Glynn MacDonald has supported all Globe theatre productions and Globe Education courses and productions since 1997.

She trained in the Alexander Technique at the Constructive Teaching Centre and has worked internationally. In 2002 she directed Transforming September 11th at the Linbury Studio and is currently the Alexander Technique tutor on the Jette Parker Young Artists Programme at the Royal Opera House. As a local resident she is also active at Southwark Cathedral.

The Sam Wanamaker Award was instituted by Shakespeare's Globe in 1994 to honour work which has a similar quality to Sam's own pioneering mission. Sam spent the final 23 years of his life tirelessly campaigning, advancing research into the appearance of the original Globe and planning its reconstruction.

The Sam Wanamaker Award was presented on stage at Shakespeare's Globe by Eve Best after the matinee performance of Much Ado About Nothing on Saturday 11 June.