Leading Shakespeare scholar Professor Stanley Wells CBE has received Shakespeare's Globe's prestigious Sam Wanamaker Award at the end of a performance on the stage of the replica Bankside playhouse. 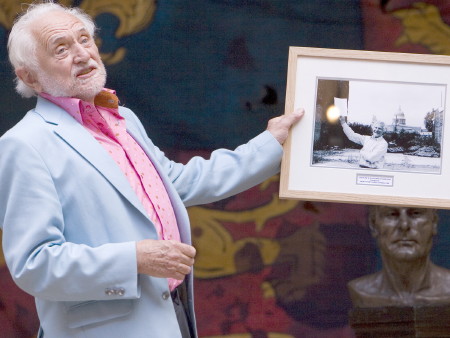 The award is given annually in the name of the founder of Shakespeare's Globe to celebrate work which has increased the understanding and enjoyment of Shakespeare.

"I'm honoured and delighted to be the recipient of the 2010 Sam Wanamaker Award," says Professor Wells.

"I knew Sam when the reconstruction of the Globe on Bankside was no more than a twinkle in his eye, and I had the greatest admiration for the enthusiasm and doggedness with which, against obstacles that would have defeated a lesser man, he pursued the task of raising funds for its completion and of gaining support for its aims. He was a great man of the theatre who also had a high respect for scholarly values.

"He saw the reconstructed Globe as an opportunity both for entertainment and for the pursuit of knowledge and understanding about the theatrical conditions of Shakespeare's time. He would have been thrilled beyond measure to know of the success with which his aims have been fulfilled.

"It has been a privilege for me to be involved with the work of the Globe in a variety of ways at every stage of its history, and in accepting the award I express both my thanks and my very best wishes for its future."

Author and editor of over 40 books, Professor Wells spent ten years editing the Oxford Complete Works of Shakespeare – the most important and groundbreaking edition since the first ever collected works was published in 1623.

He is a former trustee of the Royal Shakespeare Company and a trustee of the Rose Theatre Trust, and lectures extensively on Shakespeare and his contemporaries. His recent engagements have taken him to Venice, Elsinore and Romania, and his most recent book, published in April of this year by Oxford University Press, is Shakespeare, Sex, and Love. He was awarded the CBE for services to literature in 1997.

Professor Wells celebrated his 80th birthday in May, and in July he will be awarded an honorary doctorate from the University of Marburg having been similarly honoured by Furman, Munich, Craiova, Durham, Hull and Warwick Universities.

The Sam Wanamaker Award was instituted by Shakespeare's Globe in 1994 to honour work which has a similar quality to Sam's own pioneering mission.

Sam spent the final 23 years of his life tirelessly fundraising, advancing research into the design of the original Globe, and planning the reconstructed Theatre with its architect, Theo Crosby.

The award was presented on stage after the Globe Theatre's matinee performance of Henry IV Part 1 on Saturday 12 June – the anniversary of Sam Wanamaker's birthday – by Roger Allam, who plays Falstaff.

To coincide with this anniversary and the award presentation, a range of free educational workshops, talks and demonstrations also took place around the Globe site as part of the annual 'Sam's Day' event.

Globe Education director Patrick Spottiswoode said: "No scholar has contributed more to the study and performance of Shakespeare's plays nationally and internationally than Stanley Wells."