A decision on plans to turn the historic World Turned Upside Down pub in Old Kent Road into a Domino's Pizza outlet has been put on hold to enable councillors to make a site visit. 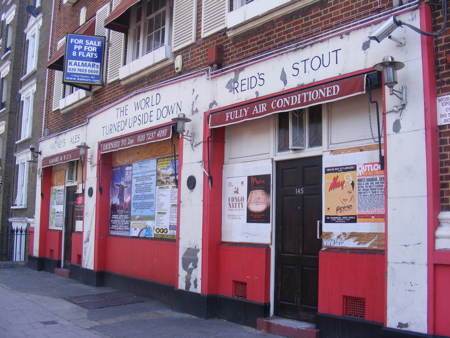 Objectors include residents of Kingsley Flats and Waleran Flats who are concerned about noise and smells from the pizza takeaway, and disturbance from motor scooters used to deliver orders.

Planning officer Sonia Watson and principal environmental protection officer Alan Blissett explained to councillors that a proposed condition on the planning application would require delivery scooter riders to turn off their engines and wheel their vehicles through the alleyway to reach the garage at the back of the pub.

Ms Watson told the community council that the World Turned Upside Down was "not the best of pubs" and "did cause some nuisance to residents".

Cllr Mark Gettleson was keen to emphasise the historic significance of the pub: "It's one of the oldest pubs in this part of London," he reminded his colleagues.

Gian Kataora from Peabody Trust, which owns Kingsley and Waleran Flats, said that he thought the proposed conditions to restrict the use of scooters were unworkable. "I don't think – from our experience – it would work," he said.

"We are very keen on this site and have spent some time overcoming the issues," said surveyor Richard Ogilvy, representing Domino's Pizza.

He said that Domino's proposal would safeguard the fabric of the pub. "I don't think anyone wants a derelict pub underneath their flat," he said.

Community council chair Linda Manchester said that she wasn't prepared to make a decision on the application without making a site visit and her recommendation to defer the application was agreed unanimously.

What a Victorian history of London said about the pub

"The oldest of the inns in the Old Kent Road, perhaps, is one near the Bricklayers' Arms Station, which rejoices in the somewhat singular sign of "The World Turned Upside Down." The house is supposed to be upwards of two hundred years old, and down to about 1840 its sign-board represented a man walking at the South Pole. It may have been first set up after the discovery of Australia, Van Diemen's Land, or Terra del Fuego; but Mr. Larwood, in his work on "Sign-boards," interprets it as "meaning a state of things the opposite of what is natural and usual: a conceit in which," he adds, "the artists of former ages took great delight, and which they represented by animals chasing men, horses riding in carriages, and similar conceits and pleasantries." The old sign-board was blown down many years ago; and in 1868 the house itself was in great part rebuilt and wholly new-fronted."