Bermondsey Community Council has resolved to grant planning permission for the World Turned Upside Down pub to become a Domino's Pizza branch. 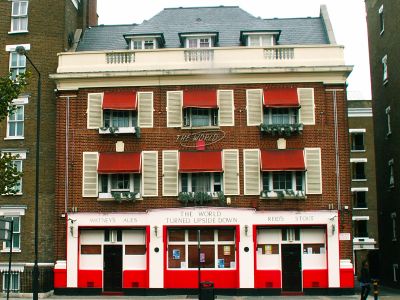 The World Turned Upside Down pictured in 2006

The application for a change of use for the famous Old Kent Road pub was heard in July but councillors deferred a decision for a site visit after concerns were raised about use of an alleyway to be used by residents and delivery scooters.

Although councillors did not make a formal site visit the application was considered for a second time at Wednesday night's meeting of Bermondsey Community Council at 160 Tooley Street.

A proposed condition on the planning permission required delivery scooter riders to turn off their engines and wheel their vehicles through the alleyway to reach the garage at the back of the former pub.

The application was opposed by the Peabody Trust who own surrounding apartment blocks including Kingsley Flats and Waleran Flats.

Cllr Paul Kyriacou said the fact that five pubs in the Old Kent Road had shut down already, and this is the sixth, concerned him hugely.

"So can we allow the road to just become a fast food outlet?"

The history of the World Turned Upside Down pub on the site is thought to stretch back more than 300 years.

On the question of scooter deliveries Cllr Kyriacou said that the Old Kent Road was the second busiest road in London and a red route.

It was pointed out that this solution was being used for deliveries from Flying Fish Sushi in Scoresby Street but Mark Lewis of Domino's said that although the company had once looked at the idea it was not proposing electric vehicles.

Ward councillor Mark Gettleson suggested that it was impractical to insist that engines were switched off every time a scooter entered the alley. At present it was a "pretty safe entrance" and there was a possibility of a loss of amenity if the residents' passage became dual use.

The application was approved on a majority vote.