Network Rail says that it would cost too much money to rename Blackfriars Station to include Bankside in its name when the new southern entrance opens this winter. 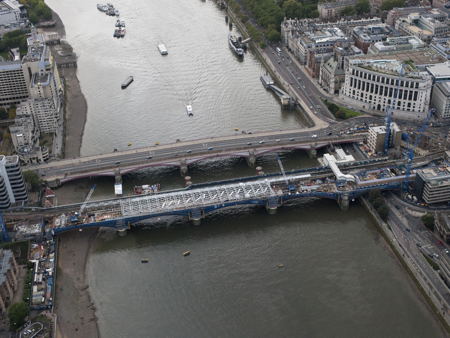 Local politicians including Simon Hughes MP, Southwark Council leader Peter John and London Assembly member Caroline Pidgeon have all lobbied Network Rail to rename the station Blackfriars and Bankside when the new Thameslink station with entrances on both the north and south banks of the river opens to the public.

Local business improvement district Better Bankside has also encouraged its members to make representations to the rail infrastructure company. A poll on the BID's website attracted 283 votes with 61 per cent in favour of the change.

Network Rail says that it is "sympathetic" to the idea but a review has found that "a full station name change was not financially viable, particularly in this age of austerity".

Instead the company has suggested that text indicating that the station provides access to the South Bank and Bankside is displayed on the station signs.

The company has launched a four-week public consultation to help decide the wording that should be used on the station's wayfinding and directional signs.

The survey can be completed online at www.networkrail.co.uk/Blackfriars and paper copies will be available from the Bankside Community Space from lunchtime on Monday 15 August.

"It is time to put Bankside on the map!" says Caroline Pidgeon AM, chair of the transport committee at City Hall.

"Including Bankside in the station's name would really help attract far more tourists and visitors to the area and lead to more money being spent locally. It would be good for businesses and good for local residents."

"Please take part in this consultation and ensure Network Rail knows your views."

The name-change has support across the party divide. "It is a pity that Network Rail is not taking this immediate opportunity to name the new station in a way which reflects its new location at Blackfriars and Bankside," says Cllr Peter John, Labour leader of Southwark Council. "But we will continue to press for a full name change at the earliest opportunity."

Simon Hughes MP is also urging his constituents to respond to the consultation: "Railway station names can be the best of all ways to put somewhere on the map," he says.

"It is really important that in the future the new station is seen to be linked to Bankside as much as to the north of the river."

Last year Mayor of London Boris Johnson was asked whether he supported the suggested name-change. He replied: "I am not closed-minded to the idea but can think of at least one problem: Blackfriars tube station will not span the river and yet will share an entrance with the new Thameslink station on the north side of the Thames. Of course, Transport for London and I will consider carefully any suggestions."