Blackfriars named major station of the year at rail awards

Blackfriars Station has won the 'major station of the year' category at the National Rail Awards. 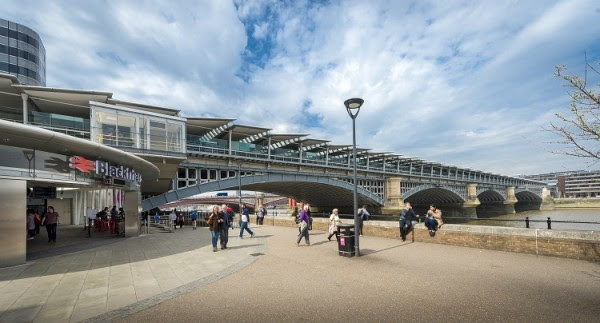 To accommodate Thameslink's extended network and its new, longer trains, Blackfriars was rebuilt to straddle the River Thames with a new southern entrance serving the South Bank and Bankside.

From next year passengers will be able to reach new destinations from Blackfriars, including Peterborough, Cambridge, Rainham and Horsham.

The National Rail Awards judges called the station's redevelopment "visionary", and said: "Blackfriars is well on the way to becoming the flagship station for the expanded Thameslink network." Judges also commented on the "spotlessly clean" glass walls that exploit the unique views of the Thames and the surrounding London landmarks.

The award also recognises the station's role as an environmental pioneer for the rail industry, boasting a solar roof with 4,400 panels generating up to 50 per cent of the station's energy needs. Last year staff achieved an environmental milestone when the station was granted 'zero-to-landfill' status, with all waste sent for recycling, composting or incineration for energy generation.

Thameslink's head of customer service Jerome Pacatte said: "We are very proud to work here because it's a clear example of the modernisation programme we're bringing in to give passengers a better service.

"There has been a lot of work by the Network Rail project team with GTR's Thameslink stations team to transform the station. My Blackfriars colleagues and their passengers are very appreciative of all the investments made to create such a beautiful environment."

Colin Morris, head of safety and environment at GTR, said: "I am thrilled that Blackfriars has received this prestigious national award, which underlines our commitment to sustainable travel.

"The station is a real environmental trailblazer. I am very pleased to see this recognised, just a year after Blackfriars became 'zero-to-landfill', a key strand of our environmental strategy."

The last of Thameslink's 1980s fleet of class 319 trains was recently withdrawn from service, with all Thameslink trains now operated by German-built class 700 Siemens Desiro trains.