20 local adults and children create dance performance for The Scoop

An audience of more than 200 people gathered in The Scoop at More London on Wednesday to watch a performance by 10 adults with learning disabilities who attend Bede House and 10 schoolchildren from nearby Grange Primary School. 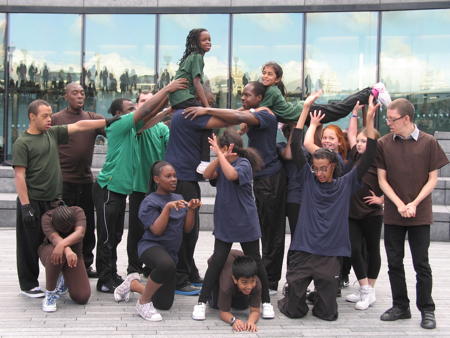 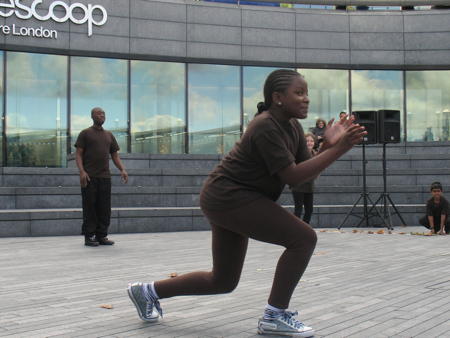 During September and October the charity 'Create' used a series of dance workshops to bring together the groups from the two organisations.

Using a 'forest' theme as inspiration for the dance, the performances were watched by an audience of over 200 people including the Mayor of Southwark, Cllr Lorraine Lauder, members of Bede House, local schoolchildren and members of the public.

The More Creative project has enabled the two groups of participants to work collaboratively to communicate imaginatively through movement.

In choreographing their own routines, they were encouraged to work together to express themselves, gain confidence and develop teamwork, helping to develop shared understanding.

Since its launch in summer 2006, more than 1,350 children and adults in Southwark have taken part in More Creative. Activities have included creative writing, storytelling, jewellery making, music, dance and visual art.

"Today's performance was a testament to the creativity and skill of the 20 adults and children who have taken part in this element of More Creative," said Nicky Goulder, co-founder and executive director of Create.

"We are committed as a charity to bringing together different groups of participants to develop shared understanding and today demonstrated the powerful impact of this approach.

"The dance had many lovely moments and it was clear that trust and wonderful friendships had been built between the two groups of participants in the creation of a stunning new work.

"The participants also loved meeting the Mayor of Southwark – they all wanted her autograph and to be photographed with her! We are so grateful to her for giving up her time to support our work in this way."