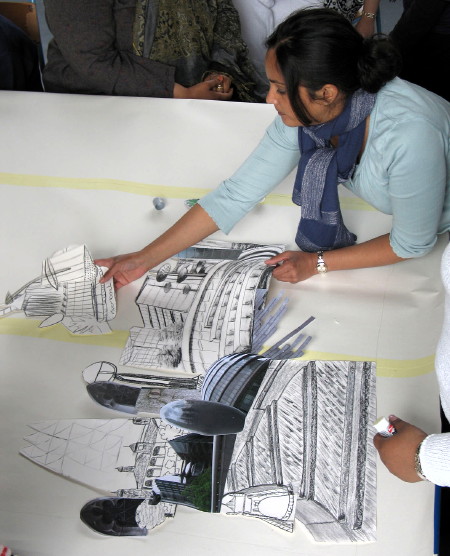 Between May and July members of Bermondsey International Parents Group which meets at Haddon Hall Baptist Church have taken part in More Creative. More than 20 parents have created a giant textile artwork inspired by More London Riverside which will go on permanent display at the centre where the group meets each week.

Bermondsey International Parents is a community group for families in Bermondsey from different backgrounds including asylum-seekers, refugees, settled immigrants, EU citizens and local parents. During the first workshop in May the participants visited More London where they made sketches of the shapes, textures and patterns that they found in the landscape including the river, trees, dramatic architecture, open spaces and public art.

"The charity's relationship with our members has truly blossomed over the years, and the projects are always loads of fun and very stimulating," says Miriam Poulton, outreach worker at BIP. "Having their work on permanent display at the end will make the members so proud!"

Between May and June Create has also been taking a series of workshops to members of Age Concern Southwark's Black Elders Group (BEG) and Stones End Day Centre (SEDC) on the Scovell Estate. The project has focused on creative writing, storytelling and music inspired by memories of London.

Create's professional writer led a series of ten poetry and storytelling workshops at the two day centres, during which 30 older people rediscovered and relatted memories and past experiences of London, using these as inspiration to compose collaborative group poems and original stories.

On the final workshop day the writer was joined by pianist Derek Paravicini (who is blind and has learning disabilities) who helped the participants to set their words to music.

"It is a privilege to work with such talented, creative people and to have a chance to hear about their memories and experiences of London," says Create's co-founder Nicky Goulder. "Their writing is beautiful, and poignant; and they have shared openly and generously."

Create will be returning to the Black Elders' Group and Stones End Day Centre for a further set of More Creative: Memories & Tales workshops in October. The older people's written work will subsequently be included in a booklet celebrating the work of all who have taken part in More Creative during 2009/10, a copy of which will be given to each participant.