Hamlet at the Young Vic

Michael Sheen does not disappoint in the title role as the tortured prince, but the production falls short of breathing new life into this oft-staged play. 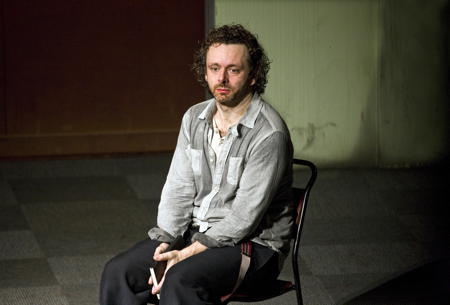 When any A-list celebrity takes on the starring role in a play as big as Hamlet there is always going to be a certain amount of expectation and hype. From the starry press night audience to the large number of preview performances, the Young Vic's production of Hamlet certainly fell into this category. Its star, Michael Sheen, had given advance interviews in multiple media outlets and in one promised "a completely different approach".

Given that Hamlet is, likely, the most performed of Shakespeare's plays, this was quite a claim and would take some living up to. There were multiple creative and innovative touches. At least three dead bodies came back to life during the course of the play. The play-within-a-play was truly disturbing and grotesque. Forgetting the casting for a second, with this stellar crew it was going to be difficult to get it wrong. Ian Rickson, of Jerusalem fame, directed; the set was designed by Jeremy Herbet, who designed the Young Vic's recent production of The Glass Menagerie; and the music was composed by Mercury Prize winner PJ Harvey.

Audience members were asked to arrive half an hour beforehand in order to experience a new way of entering the theatre. It was impressive how far it was possible to walk backstage through a maze of scruffy and unloved corridors which set the scene for the whole production – that of a mental institute. However, it felt like something of a gimmick and not too dissimilar to the experience of those who had seen Government Inspector at the Young Vic.

Sheen, naturally, dominated. His acting skills have long been praised and applauded. He was of course able to display Hamlet's range of emotions with flair and conviction. But he was at his best when inhibited by the ghost of his father; as King Hamlet he was terrifying.

Sheen is a Serious actor (with a capital S); he appeared Seriously annoyed when he was disturbed by the ringing of an audience member's mobile phone. The timing could not have been worse; just before he was about to deliver the most famous of Hamlet's soliloquies. Yet, even with his Hollywood credentials, he still deserves credit for sustaining such a high octane performance for three and a half hours every evening (although this pales in comparison to the 72 hours non-stop stint that he put in as Jesus Christ in The Passion).

The Young Vic's production does deserve much praise for its ambition and creativity. But ensure that your expectations are not too buoyed by hype. This is an excellent Hamlet, but there have been many before it and there will be many more to come.