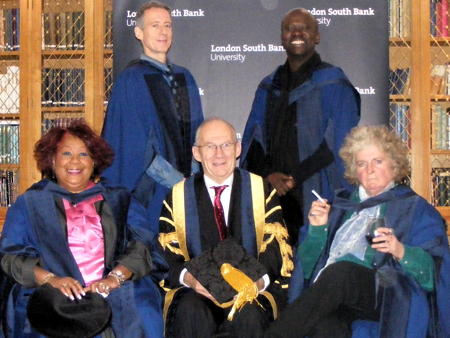 At the same ceremony eminent midwife Dame Karlene Davis was made an honorary fellow of the university.

"We are delighted to present this year's honorary awards to an exceptional group of individuals whose service to the fields of architecture, art, human rights and midwifery in London and far beyond, has enhanced the work, role and aims of our university," said LSBU vice chancellor Professor Martin Earwicker.

The Deputy Mayor of Southwark, Cllr Althea Smith, and Cllr Peter John, leader of the council, were among the guests at the ceremony.

The citation for Peter Tatchell's honorary doctorate of laws was read by executive dean Professor Mike Molan who described the activist as "something of a local institution".

"He's lived in the Elephant & Castle for over 30 years and last year he was awarded a blue plaque by Southwark Council in recognition of his work," said Professor Molan.

"While we should be proud to claim him for our borough, his influence extends far and wide."

Professor Molan recounted Mr Tatchell's central role in a variety of campaigns for gay rights, as well as his work to end apartheid, nuclear weapons and the death penalty.

There was no mention of the 1983 Bermondsey by-election in which Peter Tatchell was the Labour candidate, but Simon Hughes – winner of that contest – was in the audience to see him receive the honorary doctorate.

Maggi Hambling, who teaches life drawing at Morley College, received an honorary doctorate of letters "for her outstanding achievement as an artist and a teacher".

Architect David Adjaye, who studied at LSBU when it was South Bank Polytechnic, received an honorary doctorate of science. His local work includes the Mediatheque at BFI Southbank.

Dame Karlene Davis, who received an honorary fellowship, is also an alumna of South Bank Polytechnic. The Jamaican-born midwife rose through the ranks of the health service to become director of midwifery education at Guy's, St Thomas' and Lewisham and, later, general secretary of the Royal College of Midwives.

Music at the ceremony was provided by two soloists from British Youth Opera which is based at LSBU.

After the ceremony guests moved across the road to Glaziers Hall to enjoy a reception prepared by LSBU's own National Bakery School.