The Changeling at the Young Vic

This exaggerated take on a classic is so barely recognisable from its original form that farce has replaced tragedy. 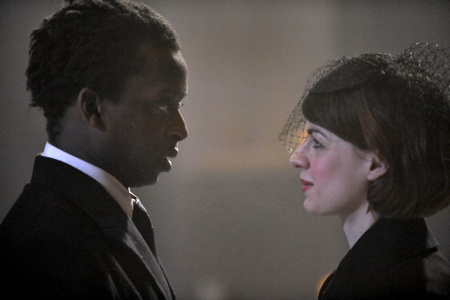 The Changeling was written by Thomas Middleton who, whilst celebrated in his time, has since always been viewed in the shadow of Shakespeare. It has all the right ingredients for an eighteenth-century play – unrequited love, overbearing parents, escalating deceit and deception – yet it strikes a quite different tone to the work of the Bard. Its language is simpler, its plot more predictable and its characters more exaggerated.

The director, Joe Hill-Gibbons, has picked up on this lack of subtlety and run with it. Beatrice-Joanna, who for the love of one man asks another to kill her betrothed, is cunning, manipulative and unhinged. Da Flores, who commits the dastardly deed, is pathetic and grotesque. Diaphanta, Beatrice-Joanna's maid, is brazen and bawdy. The madmen and fools of the local asylum, quite literally, rattle their cages and drool. Hill-Gibbons has a great track record, most recently with The Beauty Queen of Leenane and The Glass Menagerie, both at the Young Vic. With Middleton's text, he's taken some liberties and had some fun.

The play is set in no defined time and place. The unremarkable stage is transformed into often nightmarish scenes by lurid lighting and a blaring pop soundtrack. Food is used in a manner not suited for the light-hearted; the symbolism of the wedding night is represented by jelly and trifle. Whilst the audience may at first have groaned at such an obvious and lowbrow device, the sight of the smeared and dirty actors marked by their sins turns out to be more effective than originally thought. Similarly, the wedding scene, performed to Beyonce's Single Ladies, appeared initially too try hard. Yet strangely, the more they stuck with the comic routine, the more it worked.

Some of the acting was hammy; the struggle to the death between Da Flores and Alonzo, Beatrice-Joanna's finance, was more fumble than fight, ending in a drowning in a bowl of jelly. Dialogue was quite often lost amidst the hysteria. Ultimately however, the acting was excellent. In particular, Alex Beckett, who plays both Jasperino and Lollio, and Charlotte Lucas, who plays Diaphanta and Isabella, deserve note for the skill with which they switched character. Jessica Raine, as Beatrice-Joanna, was compelling and worthy of the 'face to watch' label which has been applied to her.

The Changeling lacks the sophistication and subtlety which marks the Bard's greatest works, but this should not hold it back from becoming better known to a modern audience. This interpretation has the potential to be great also, yet the play's intended tragedy is lost in farce and the audience ultimately feels no sympathy for the doomed protagonists. Toned down, less of a changeling itself, it could be so much more.