Employers in Vauxhall have voted to approve the setting up of a business improvement district stretching from Lambeth Bridge to Nine Elms and the Oval Cricket Ground. Vauxhall One's plans include a ranger service and refurbishment of railway arches. 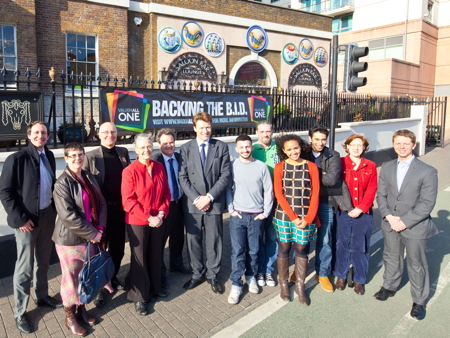 Members of the Vauxhall One steering group

Vauxhall One is the 27th BID to be set up in London but only the second in the borough of Lambeth after Waterloo Quarter BID.

BIDs are companies owned and led by employers in a specific area. Their core funding comes from a levy on the occupiers of all eligible rateable properties.

The Vauxhall One BID was approved by 83 per cent of voters and achieved a 91 per cent vote in favour by rateable value. For a BID ballot to be successful it must achieve a majority of both number of votes and rateable value.

"Vauxhall One is delighted with this strong show of support and commitment from businesses, charities and public agencies, from both daytime and nighttime economies," says Vauxhall One chair Richard Tice.

"It is a real show of their intent to make a difference, to see Vauxhall become a safer, cleaner and better place for employees and residents alike. Our job now is to deliver on this support. Work begins immediately."

The Vauxhall One area includes parts of SE1, SE11 and SW8. In SE1, the BID's boundaries include Albert Embankment and part of Lambeth Road.

The BID will take effect on 1 April. A renewal ballot will be held after five years. Vauxhall One will have an annual budget from the BID levy of just over Ł800,000.

Its key services will include a uniformed ranger service, refurbishment of the area's many railway arches, free waste recycling, a local incentive card and iPhone app, employee volunteering and mentoring of school students.