The project to fit new energy-efficient colour-changing lights to Tower Bridge took a big step forward this week when abseilers attached the highest of the 1,800 LED lights, 61 metres above the Thames. 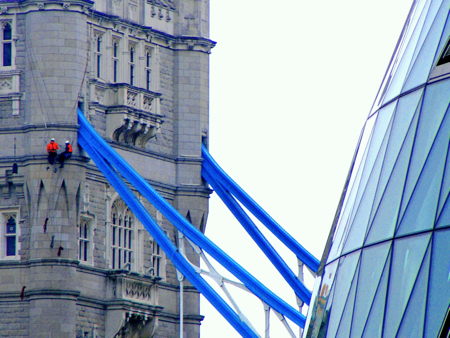 EDF, GE and the City of London Corporation (which own the City bridges) are backing the project which was brokered by Mayor of London Boris Johnson.

"All hail to these plucky abseilers who are helping install a spectacular new low-energy lighting system for Tower Bridge in time for London's historic summer," said the Mayor.

"This is a great example of how hosting the games is delivering benefits for Londoners that will continue for many years after the last medal has been given out."

"The system is very sophisticated but the equipment is less obtrusive than the current lighting kit so the effects will both show of Tower Bridge better – and allow the odd special effects celebration."

Work will be finished by May and the news lights will be first seen in action in June.