Archbishop of Southwark receives freedom of the City of London

The Most Revd Peter Smith, Roman Catholic Archbishop of Southwark, has been granted the freedom of the City of London. 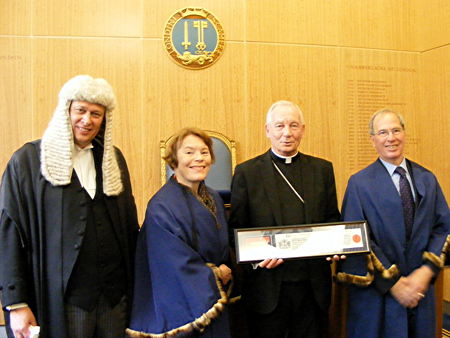 The ceremony took place on Thursday morning in the Chamberlain's Court at Guildhall.

The Archbishop was nominated for the honour by Catherine McGuinness, deputy of Castle Baynard ward, and Stephen Haines, Cornhill ward deputy.

Castle Baynard ward includes a tiny portion of land within the Southwark Archdiocese at the south end of Blackfriars Bridge.

Stephen Haines is an Anglican priest and a former Southwark Cathedral chaplain who serves on the cathedral finance committee.

During the twenty minute ceremony the archbishop promised to "be good and true to our Sovereign Lady Queen Elizabeth the Second" before signing the Freeman's Declaration Book.

He was then presented with a parchment copy of the Freedom inscribed in a special ink together with a copy of the 'Rules for the Conduct of Life' which date from the mid-18th century.