Mayor of London Sadiq Khan lit a candle of remembrance on the altar of Southwark Cathedral on Monday evening as part of a service to mark the second anniversary of the terrorist attack on London Bridge. 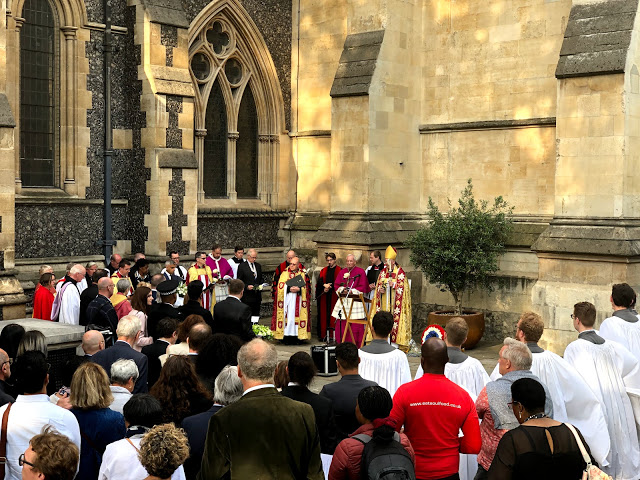 The cathedral's bells were half-muffled as the congregation of survivors, bereaved families, civic leaders, police officers and others affected by the terrorist attack assembled for the service.

At Monday's Choral Evensong the first lesson – from the book of Micah – was read by Amir Eden, executive chair of local residents' organisation Living Bankside.

The second lesson was read by PC Wayne Marques of the British Transport Police, who received the George Medal for his bravery on the night of the attack.

After the service, the names of the eight people killed in the terrorist attack were read out and silence was kept in front of the tree of healing planted a year ago in the cathedral churchyard.

Flowers were laid in front of the tree of healing by civic leaders including Mayor of Southwark Sandra Rhule, Mayor of London Sadiq Khan and Southwark Council leader Peter John.

Later in the evening, the Cathedral's Merbecke Choir sang the office of Compline (Night Prayer) starting at 9.58pm, exactly two years on from the start of the attack.

"I am sure that this time of anniversary is particularly painful for all those whose lives were touched by the attack on London Bridge, especially as the inquest into the attack is taking place at this time as well," said the Very Revd Andrew Nunn, Dean of Southwark.

"The Cathedral building still bears the scars of the attack as this reminds us each day of the fragility of human life and of the need to live together in peace.

"We hope that this Service of Remembrance will bring some healing to those affected and help them to know that the terrible events of that day two years ago are not forgotten'.

Cllr Peter John, leader of Southwark Council, said: "Two years may have passed since the terrible events of 3 June 2017, but the impact of that night will never leave us in Southwark.

"The one light that shone through the darkest of times was the strength, unity and compassion of our community in supporting all those affected by the attacks, and so it is right and fitting that we come together on Monday at Southwark Cathedral."