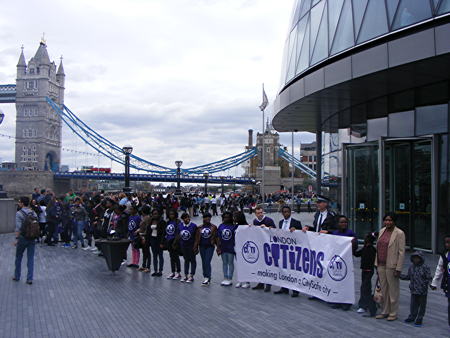 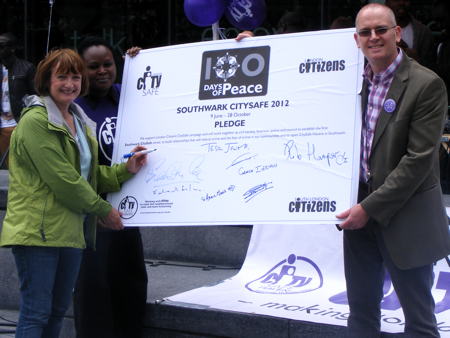 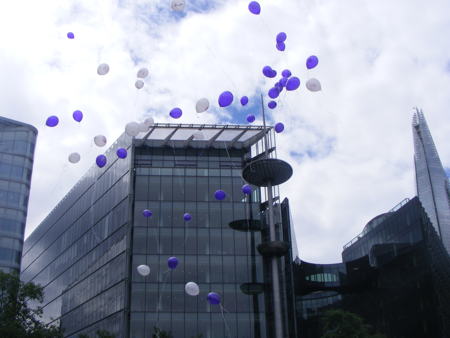 The 100 Days of Peace initiative is inspired by the truce that was called 50 days before and after the ancient Olympic Games to enable athletes to reach the competition safely.

London Citizens, a federation of faith groups and community organisations, will work to turn dangerous areas into CitySafe Zones.

The season ends in October with the release of a new CitySafe map of London, highlighting the new CitySafe Zones and places young people can turn to for safety.

Teams of young people build relationships with local shopkeepers and business owners to open their premises as CitySafe Havens. These are places of safety for people in immediate danger, whose staff have also pledged to report 100 per cent of crime to the police.

"CitySafe Havens will save lives," says Grace Idowu, whose son David was fatally injured on the Tabard Gardens Estate. Mrs Idowu is a prominent supporter of the 100 Days of Peace campaign.

"One phone call to the police and my son might still be with us.

"The CitySafe sticker means someone will make that call. That is all we are asking, that people look out for one another."

City Hall became a CitySafe Haven in 2010 and the Mayor of London Boris Johnson has given his support to the latest initiative to create more designated safe spaces across the city: "Keeping our young people safe and helping them to secure jobs and bright futures continues to be a top priority," he said.

"We are already more than halfway to creating 100,000 apprencticeships in London and, are working to improve young lives through volunteering and mentoring programmes and an inquiry into raising education standards.

"By engaging with young people and working with communities, the 100 Days of Peace initiative builds on this ongoing work, helping to combat the awful affliction of youth violence and greatly contributing to the health and happiness of this city.”

Pupils from Notre Dame RC Girls' School, and their headteacher Sister Anne-Marie Niblock, played a prominent part in Saturday's event at The Scoop.

The initiative has received a major boost from Tessa Jowell MP who has donated £100,000 of the settlement she received from News International in relation to phone hacking to London Citizens.

"Today marks the beginning of 100 days when every day across London we want to do more work to create CitySafe zones and havens which will be safe places for young people who feel themselves to be in danger," the Dulwich and West Norwood MP told the assembled young people in The Scoop on Saturday.

"It is my greatest privilege to be able to work with London Citizens in this way – an absolutely brilliant organisation campaigning for the very practical things that make a difference to the lives of Londoners. Not just the living wage but also safety in our city. There is no better or greater Olympic ambition than that."

Others who have signed the Citysafe pledge to work to establish CitySafe havens in Southwark include the council leader, Cllr Peter John, and Simon Hughes MP.

In Lambeth a CitySafe rally was held in Jubilee Gardens on the South Bank in the presence of the borough's deputy mayor Cllr Mark Bennett.