The Turbine Hall at Tate Modern was the setting for a protest on Friday calling for the gallery to pay its cleaners and catering staff the London Living Wage. 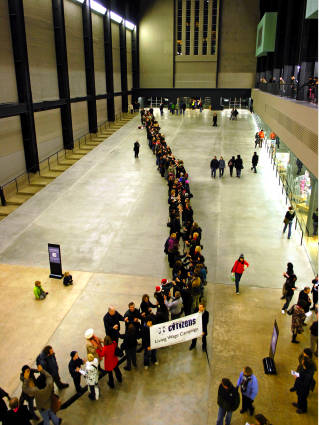 Demonstration in the Turbine Hall on Friday. Photo © ChrisJepson.com

The London Living Wage – currently Ł7.20 an hour – is the level of pay and conditions that enables a full-time worker to make ends meet for themselves and their family in the capital.

The Greater London Authority calculates that workers in London need an hourly wage rate almost 20 per cent above the national minimum wage simply to keep above the poverty level.

About one in seven of London's full-time workers and almost half of the city's part-time workers are paid at a rate below this Living Wage.

South London Citizens – a coalition which includes community groups, trade unions and faith organisations – says that it has been trying to negotiate a Living Wage deal with Tate for nearly a year – particularly to help the 50-plus cleaners and catering staff at Tate Modern, many of whom live in South London.

"Tate ensures all its contractors must comply with the statutory requirement to provide at least the national minimum wage," says a gallery spokesman.

The protest came just two days after Tate trustee John Studzinski – donor of Ł5 million towards the Bankside art gallery's planned extension – told an Evening Standard debate held at Tate Modern that organisations should make sure that they were looking after their own employees properly before making large donations to third parties.

"When companies talk to me about getting their employees to give money, I say 'Yes, but does the cleaning lady know how to read?'," he told the audience of invited guests and Evening Standard readers.

"Because if you are not respecting the dignity of your employees, that is the first place where corporate social responsibility should begin."

The national minimum wage is set by the Government's Low Pay Commission which is chaired by Paul Myners who also holds the position of chair of Tate's board of trustees. Mr Myners is also the chairman of Land Securities, the developer responsible for the Bankside 123 development just yards from the gallery.

Members of the South London Citizens group include the North Lambeth Methodist Circuit which encompasses the Lambeth Mission & St Mary's in Lambeth Road.