Staff from Guy's & St Thomas NHS Foundation Trust held a protest outside the Sainsbury's Local store in Borough High Street on Wednesday lunchtime as part of a campaign against pharmacy privatisation. 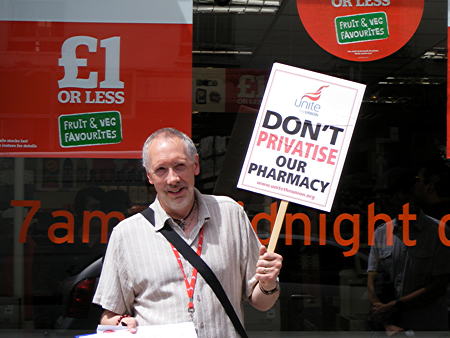 "We are standing outside Sainsbury's here today to highlight the fact that Sainsbury's are the preferred bidders for dispensing pharmacy services at Guy's, St Thomas' and King's, said Gareth Page, chair of the workplace representative group for the Unite union at Guy's and St Thomas'.

He was speaking on Wednesday lunchtime as fellow hospital staff collected signatures from customers.

"Unite the union is opposed to any NHS privatisation," he stressed. "This is a local action. It is affecting us.

"We are trying to corporately embarrass Sainsbury's into dropping their bid for it. We do know that Sainsbury's are unhappy that we are actually campaigning outside their branches. We shall go on until Sainsbury's drop their bid."

The campaign will be taken to customers at Sainsbury's Local in Waterloo Road next week. Later in July Unite members will be protesting outside Sainsbury's headquarters in Holborn and attempting to speak to shareholders as they arrive for the AGM at Westminster.

Last week Vauxhall MP Kate Hoey raised the proposed privatisation in the House of Commons, but health minister Paul Burstow said that the hospital trust was under no obligation to carry out public consultation on its plan to outsource the pharmacies.

Last month a Guy's and St Thomas' NHS Foundation Trust spokesman told us that the new pharmacy arrangements would lead to an "improved patient experience" with reduced waiting times, increased choice and reduced costs, as well as a new retail pharmacy service on the hospital campuses.