A memorial to the 330 people whose remains were dug up as part of the construction of the Thameslink railway viaduct through Borough Market has been unveiled at the Kemnal Park Cemetery in Sidcup. 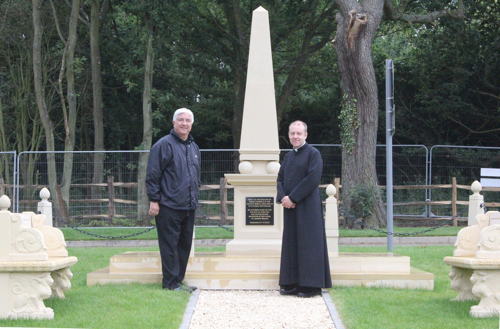 Barry Albin-Dyer and the Very Revd Andrew Nunn at the memorial (photo: Diocese of Southwark)

Last week the Dean of Southwark, the Very Revd Andrew Nunn, and funeral director Barry Albin-Dyer visited Sidcup to see the memorial in advance of the cemetery's opening on 13 August.

The remains of 330 people were uncovered during excavations by Network Rail around Borough Market as part of the Thameslink Programme.

When the remains were found, the Dean and Chapter of the Cathedral, working with Network Rail and Albins, made the arrangements for the bodies to be reburied in the new Kemnal Park Cemetery in Sidcup.

Most of the remains dated from the early 19th century and it possible that Albins (established more than 200 years ago) may have been involved in some of the original burials.

Two months ago the cathedral held a funeral service for an 'unknown parishioner' to mark the reburial of the bones.

"Southwark Cathedral has been pleased to work with Network Rail and Albins to provide this resting place for the bones discovered around the cathedral," said the Very Revd Andrew Nunn.

"The new cemetery will be a beautiful and peaceful place for those who wish to visit the graves of their loved ones and is a fitting place for these our predecessors to find their final resting place."