A coffin was carried through the streets of SE1 on a horse-drawn gun carriage on Friday and dozens attended his funeral at Southwark Cathedral - but no-one knows the identity of the dead man. 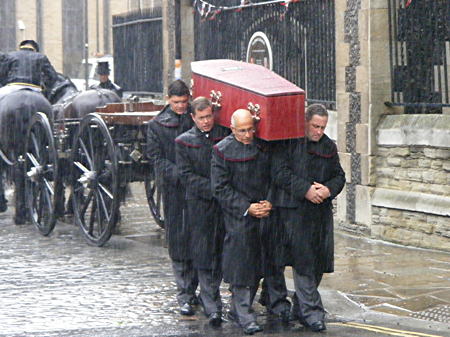 The coffin is carried in to the cathedral through torrential rain 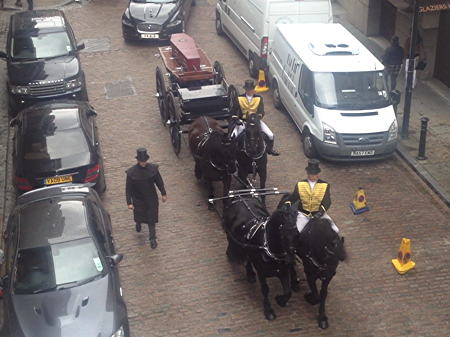 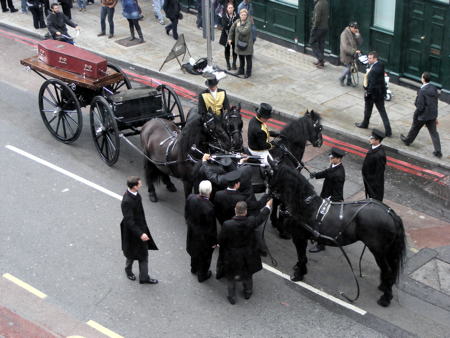 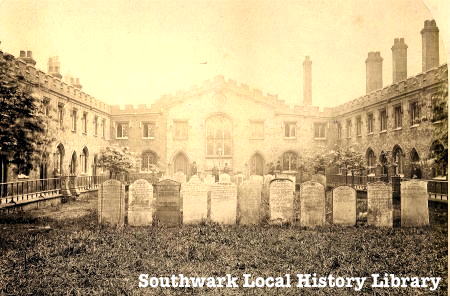 The bodies were originally buried in the graveyard of the St Saviour's Almshouses founded by Thomas Cure. Picture (circa 1875) courtesy Southwark Local History Library 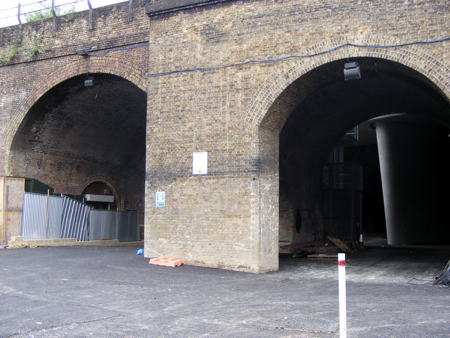 330+ bodies were dug up from this area as part of the project to widen the rail viaduct between Park Street and the Hop Exchange. One of the columns of the new viaduct can be seen through the arch on the right

The remains of over 330 people, mostly dating from the early 19th century, have been removed from the former St Saviour's Almshouse Burial Ground during the construction of the a rail viaduct across Borough Market as part of the Thameslink Programme.

"As the work on the new viaduct took place many graves of former parishioners were disturbed and their earthly remains disinterred," said the Dean of Southwark, the Very Revd Andrew Nunn.

The site is behind the Market Porter pub on the corner of Stoney Street and Park Street and is bounded by the back of next door shops and the rear of the Hop Exchange in Southwark Street.

The bodies have been reburied in the new Kemnal Park Cemetery near Chislehurst but on Friday morning a complete skeleton of one of the unknown persons was brought by horse-drawn carriage to the cathedral for a second funeral.

The Dean said that the service, from the 1662 Book of Common Prayer, had been chosen to resemble closely in words and ceremonial the form of service likely to have been used at the man's first funeral.

The lesson was read by John Hughes, development manager for the Thameslink Programme at Network Rail, which had helped to arrange the funeral and reburials.

Present in the congregation were Pat Quinlivan and artist Mike Challenger whose homes overlook the former burial ground and who have experienced much disruption during the Thameslink viaduct project.

The Bishop of Southwark, the Rt Revd Christopher Chessun, and canon pastor Bruce Saunders took part in the service.

Steve Pearce, president of the National Association of Funeral Directors, came to witness the involvement of his fellow member Barry Albin Dyer of F A Albin & Sons in the unique occasion.

Albin's provided the horses and supplied the coffin which was hand-made with high quality materials to an early 19th-century design.

He added: "As rector of this parish as well as Dean, what happens to the bones of those we've buried in the past are important to me, whether they be here in this part of Borough or on the more controversial site in Redcross Way. How we respect the dead is an indication of how we respect the living; the commitment we have to each other is ongoing, it doesn't end. We're bound together by bonds greater and more lasting than others might imagine."

The Dean explained that the disturbance of burials in the course of the construction of the Thameslink viaduct echoed what had happened 160 years ago when the railway was first constructed and the bodies of Southwark parishioners were reburied at the then new Brookwood Cemetery in Surrey.

"This our brother before us represents all that's been and all that will be in this community. History may have a strange way of repeating itself but love constantly repeats itself, for the love we show to each other is but a mere shadow of the divine love shown to us by God in Jesus Christ."

The unknown parishioner left the cathedral as the choir sang the Nunc Dimittis.

The coffin was placed on a horse-drawn gun carriage for its final journey through local streets en route to Chislehurst.

Soon after departure, the procession came to a sudden halt in Tooley Street as the horses attempted an unscheduled sharp left turn into narrow Bridge Yard. Soon after a horse briefly broke loose.

However, calm was swiftly restored and the procession continued after just a few minutes. The final burial took place at Kemnal Park during the afternoon.