Two formerly homeless men who spent many years sleeping rough on the streets around the South Bank realised one of their dreams last week when they were given the chance to ride on the London Eye. 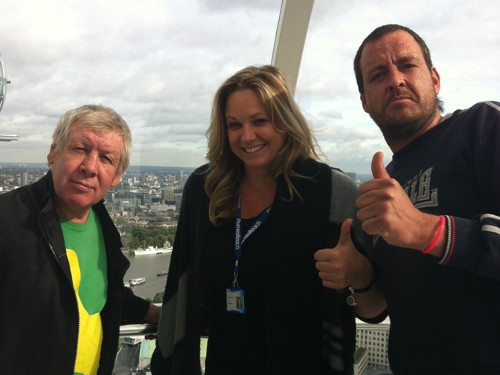 Peter Riley and George Russell, who slept rough for many years in Lambeth, battling with an alcohol dependency, were recently helped by Thames Reach's Lambeth Street Outreach Response Team (SORT) into a Lambeth hostel for the homeless.

With funding from Lambeth Council the Thames reach staff are encouraging the men to break away from their street lifestyle, tackle their drinking, boost their self-worth and take part in the activities many people take for granted.

"It was a great day out and they both really enjoyed themselves," said Charlene Taylor from Thames Reach.

"We went for lunch afterwards along the South Bank and sat outside watching the world go by.

"There was lots of laughter and the shared experience helped cement the working relationship that could prevent the two men slipping back into homelessness.

"Giving George and Peter the option to choose an activity in which to participate helps them to start challenging the barriers they face being on the fringes of society, as well as help raise their self-esteem. This is essentially the basis of personalised case working."

Peter Riley, who now plans to visit local museums and gardens, said: "It were brilliant. It was so good to finally go on the London Eye after seeing it for so many years as I drank out locally on the streets with my mates."

George Russell, who now volunteers at Vauxhall City Farm, said: "Fantastic! I am a Londoner and I know all these landmarks, so it was amazing to see them all."

Thames Reach says that its Lambeth SORT has helped more than 100 homeless people off the streets in 2012.