More than 20 rough sleepers in the Waterloo area were given advice by a Lambeth Council-led team on Tuesday morning. 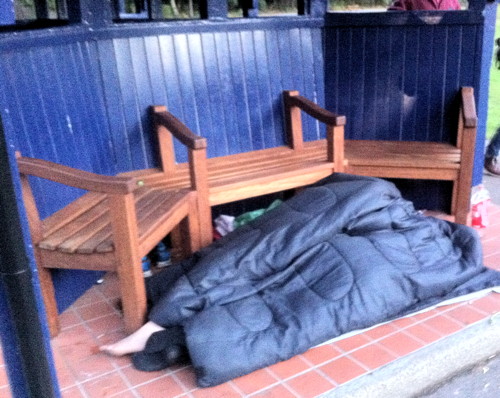 "We are campaigning to end rough sleeping in the borough," said Cllr Jack Hopkins.

"This morning's effort illustrates how we are helping these very vulnerable people break the lifestyles which have resulted in them sleeping on our streets.

"These are people at their lowest ebb and this is a problem we need to end for the wellbeing of the whole borough."

The first stop was Archbishop's Park where seven people from Poland and Lithuania were sleeping in shelters.

The eastern Europeans were spoken to about their employment and migration status and given details of support services.

Mr Haggerty said: "We try and use a Balance of enforcement and welfare to encourage people to seek help to get them off the streets.

"We have also been working with the UK Border Agency and our other partners to target central and eastern Europeans who are not exercising their treaty right and sleeping rough.

"Some are street drinkers who have been begging and acting aggressively towards the general public, so it is important we tackle this issue."

Treaty rights require migrants from the EU to prove they are either seeking work, or in employment after being in the UK for more than three-months. If no proof can be provided the migrants can face deportation.

An earlier operation on 21 August with the UK Border Agency resulted in five people being sent for an immigration assessment and two people being deported.

Thames Reach is contracted by Lambeth Council to provide outreach to rough sleepers and Mr Norman said his team were out every day.

He said: "It's challenging work, and over the last 12 months across London there has been an increase in the numbers of people sleeping rough.

"But Lambeth does have very good services offering credible support and a robust response to the problem."

Earlier this year Lambeth and Thames Reach launched a concerted effort to eradicate rough sleeping in the borough.