A new collaboration between artist Dryden Goodwin and scientists from King's College London this month will highlight the need for a public debate on air pollution in the capital. 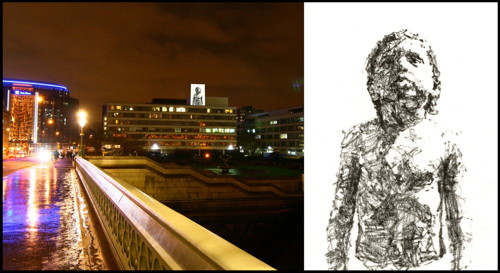 An 8-metre screen has been erected on the roof of Gassiot House at St Thomas' Hospital, facing the Houses of Parliament across the river, and every night until 28 October pedestrians crossing Westminster Bridge will be shown an animation featuring more than 1,300 tiny pencil drawings by Dryden Goodwin of his 5-year-old son.

The piece, entitled Breathe, is part of a programme called Invisible Dust.

Curator Alice Sharp linked Goodwin with Professor Frank Kelly, an expert on lung health at King's College London and an advisor to the Government on air pollutants.

"The dramatic scale of the Breathe projection high up on the skyline next to the Houses of Parliament will highlight Dryden Goodwin's extraordinary draughtsmanship and at the same time the fragility of a child drawing breath," said Alice Sharp.

"Goodwin's drawing resonates with us the dangers that children living in our cites are facing everyday from our polluted air caused by traffic emissions."

Speaking at the launch event in St Thomas' Hospital on Monday, Dryden Goodwin told guests: "I was struck by what an amazing opportunity this is to place a piece of art in such a conspicuous setting ... close to where Monet once stood, repeated painting the particular qualities of the diffused light shrouding the Houses of Parliament, and inadvertently capturing for posterity images of London's polluted atmosphere just over 100 years ago.

"To see the rendered images of my small son's head, torso and arms set against this cityscape – at times looking up, addressing the vastness of the sky and the atmosphere; then facing down across to Big Ben and the Houses of Parliament, the location of one of the western world's most influential institutions; then with eyes closed looking down as if asleep or evoking introspection; his changing gaze – I hope – creating points of connection.

"I hope the image of the shifting rhythms of the breathing – sometimes regular, sometimes faltering, sometimes laboured – can create a consciousness about the act of breathing.

Professor Kelly set the scientific context for the collaboration: "60 years ago we had a lot of visible pollution in London ... due to the burning of coal in homes and power stations.

"This led to a lot of extra deaths which were very obvious to everyone, even the public.

"The Clean Air Act was brought in 1956 and it really did improve air quality to a great extent."

Professor Kelly showed a picture taken from the roof of St Thomas' Hospital on a sunny day in 2012 in which it was possible to detect a faint "grey smoggy haze" above the capital.

"This pollution comes from the fact that we live in a very successful city with nearly 8 million people moving around regularly.

"The problem I have as a scientist is that when people can't see the problem ... how do we get across the message that in fact we need the equivalent of a new Clean Air Act in 2012? That's the challenge that we scientists have."

"There's no doubt about the impact of invisible air pollution on the health and wellbeing of our local population and the population of the country."

• Breathe can be seen daily from 6pm until 28 October