Transport for London has applied for planning permission to install a Barclays Cycle Hire docking station with up to 84 docking points on the vacant space above the ticket hall of Southwark Underground Station. 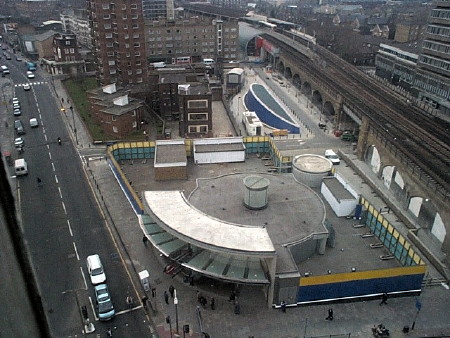 Southwark Underground Station has been surrounded by hoardings since it opened in 1999 as plans for a high-rise hotel or office development above the ticket hall have not borne fruit.

Now Transport for London has applied for planning permission to use some of the empty space for a new cycle hire docking station.

As the docking station will be above ground level, two new sets of stairs with wheel channels for bicycles will be provided.

The hoardings – currently used for an exhibition of portraits by Dryden Goodwin – will be moved back to open up the space for the docking station.

The docking station is likely to prove popular with TfL staff based at the Palestra office building just across the road.

Recent TfL figures show that just over 4,000 SE1 residents have registered for Barclays Cycle Hire – more than in any other postal area in London.

Southwark Council recently granted permission for the extension of the Bankside Mix docking station despite objections from IPC Media.

Planning applications for extensions to the Hop Exchange and New Globe Walk docking stations are currently being considered by the council.