"Rest assured we will have women in the episcopate," Bishop of Southwark Christopher Chessun said on Thursday. 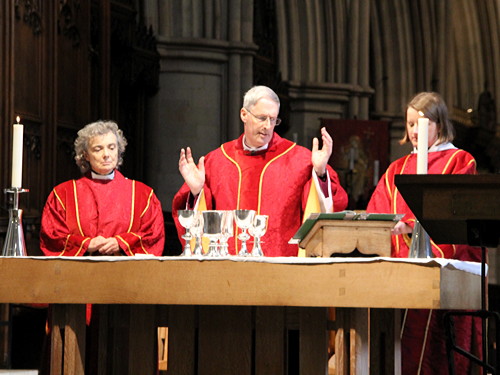 The Bishop of Southwark at the altar with Revd Georgie Heskins and Revd Anna Macham (Photo: Southwark Diocesan Communications)

"The principle is already decided and along with the rest of the bishops, I am committed to working purposefully in finding a way forward," said Bishop Christopher at Thursday's lunchtime Eucharist at Southwark Cathedral.

The bishop had invited clergy from around the Diocese of Southwark to gather at the cathedral on Thursday to pray and discuss the the failure of General Synod to agree final legislation for the consecration of women as bishops.

Bishop Christopher was assisted at the altar by two women and all three priests were vested in red to mark the feast day of female martyr St Cecilia, patron of music.

"We are," he said, "still waiting for the completion of the journey which will allow women to be consecrated to the episcopate."

In his sermon, Bishop Christopher said that he was deeply sorry about the synod vote.

"I know the pain of rejection and hurt and failure that this brings in many and I share it wholeheartedly." he added.

"We have seen the bewilderment of politicians, press and parishioners up and down the land.

"Many at synod yesterday were talking in terms of bereavement and grief. Women and men alike who eagerly and joyfully, for good solid theological and biblical reasons, want to see women admitted to the episcopate have felt rejected, isolated and angry."

Turning to the clergy later in his address, the bishop said: "This (Southwark) diocese is incredibly blessed in the quality of the gifting, commitment and tenacity of those who minister in the name of Christ, women and men ministering together.

"Yet ministry is not for ourselves but for others.

"It is for those entrusted to our care in our worshipping communities of faith and in our responsibility of care for the wellbeing of every person in each of our parishes throughout the Diocese, especially those in greatest need: especially the marginalised, especially the poor, especially the excluded. It is for this that we have been called into the Lord's service."

Bishop of Woolwich Michael Ipgrave was among the clergy present in the congregation. Two priests who are mothers brought their babies including curate Kat Campion-Spall whose seven-week-old daughter Iris had been in the Synod public gallery during the vote.

Elephant & Castle parish priest Giles Fraser, writing in The Guardian, described the vote as "suicidal stupidity" and said: "I am ashamed to be a part of the Church of England."

Speaking in the House of Commons on Thursday, Simon Hughes MP said: "Can we all send our support, love and concern to all women who are ordained or hope to be ordained in the Church – including your chaplain, Mr Speaker, and all others?

"They must feel even more frustrated than we do, but we are not going to let them down. Given that, over the past 20 years, the church has managed to sort out how parishes that did not want women priests could be looked after, does the Second Church Estates Commissioner not agree that it must be possible to resolve this issue?

"Will he invite the minister for women and equalities to offer the services of the Government, not to tell the church what to do but to offer it professional advice on how to deliver what the majority want, as soon as possible?"

Tony Baldry MP, representing the Church Commissioners, replied: "I am sure that it must be possible to resolve this issue. The important thing is to continue to work at it until it is resolved.

"An increasing number of ordinands coming into the church are women, and we need to have a church in which everyone is valued. I am sure that the right honourable gentleman is correct is saying that, at present, a number of women out there in the clergy are feeling undervalued.

"That is wrong; they are very much valued and cherished, and there needs to be a full place for them in our national church."