More than 1,000 people packed into Southwark Cathedral on Saturday morning for the funeral of the Very Revd Colin Slee. 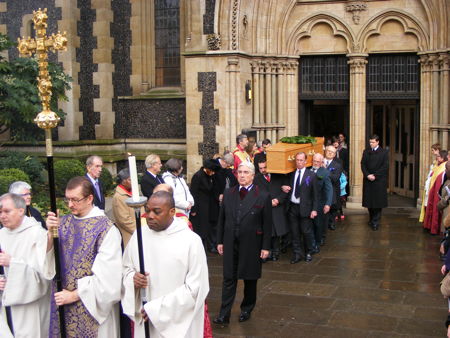 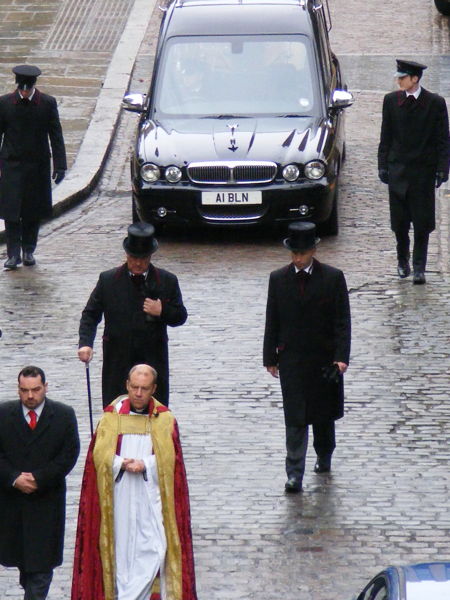 The funeral procession in Montague Close 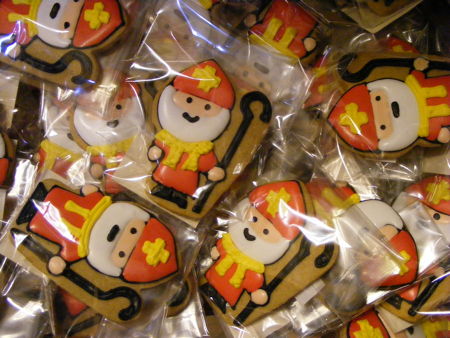 St Nicholas biscuits were distributed as the congregation left the cathedral. Colin Slee's patron saint was Nicholas and next Monday is St Nicholas Day.

The Archbishop of Canterbury, the Most Revd Rowan Williams, was among those in the snow-covered churchyard on Friday evening when the Dean's body was brought to the cathedral.

The cathedral stewards lined the approach to the south door where the Primate was waiting with the cathedral chapter.

After the coffin had been sprinkled with holy water it was taken into the nave to be covered with the cathedral flag. Canon Bill Ritson placed a Bible on the top and the Dean's stole was brought from his stall.

Canon Ritson, who lives in Waterloo, has described Colin Slee as "a man of boundless energy, he was full of bounce and joie de vivre, good-hearted, hard-working, enthusiastic, outspoken, and ever valiant for truth and justice".

The Archbishop of Canterbury paid tribute to Colin Slee on Radio 4's Last Word programme broadcast on Friday afternoon, describing the international perspective the Dean had brought to his work in Southwark as "a breath of fresh air".

He also spoke about how their friendship had endured despite Colin's disapproval of the Archbishop's handling of the controversy surrounding the appointment in 2003 of Jeffrey John (then Canon Theologian at Southwark Cathedral) as Bishop of Reading.

"I value very much the fact that he was a big enough man not to let friendship be undercut by some very demanding differences," he said.

On Saturday morning hundreds of mourners arrived at the cathedral for the Reqiuem Eucharist. The acting Bishop of Southwark, Rt Revd Richard Cheetham, presided at the service and the preacher was the Very Revd Jeffrey John, Dean of St Albans.

At the start of the service Colin Slee's son Ben quoted his father saying before death: "My body is falling apart but I am ready for this."

"He came here to make this place stronger," said Ben who noted that faith, family and church were the three things that really mattered to his father.

Colin had been a keen rower and his oars had been brought into the cathedral. Ben revealed that his father had likened approaching death to approaching the enclosures at Henley. The congregation responded with gusto to an invitation to stand and give three cheers as if at the Royal Regatta.

In his sermon Jeffrey John spoke of Colin Slee as "surprisingly unscared" of his own death and of life in general.

"The papers and his detractors always portrayed Colin as an arch-Liberal, as if he were the leader of a faction obsessed with a secular agenda," he said. "It was never true, and it misses the whole point. For Colin it began and ended with God.

"The truth is that he was a traditional Catholic Anglican, thoroughly disciplined and orthodox in his faith, a man of profound prayer and penitence. His idea of inclusiveness was not that 'anything goes', but that we are all equally in need of healing, and therefore the Church must equally be a home for all. Colin welcomed people because Jesus did.

"And that didn't just mean welcoming gay people and women bishops, important as that was and is. He welcomed everybody. The first thing he did in Southwark was to take down the notice that said 'Worship in progress – Cathedral closed'."

The New Testament passage was read by Jennie Page, former chief executive of the Millennium Dome and now chair of Southwark Cathedral Enterprises.

The long procession of clergy included the parish priests of many of SE1's churches, as well as the Dean of Southwark's Roman Catholic Cathedral, Canon James Cronin.

The Mayor of Southwark, Cllr Tayo Situ, and the deputy lieutenant for Southwark, Jenny Bianco, were among the congregation.

The two past Bishops of Southwark, Roy Williamson and Tom Butler, were also present.

Colin Slee's ashes will be interred in the retrochoir of Southwark Cathedral at a private service later in the month and there will be a memorial service in the New Year.

• The Sub Dean, Canon Andrew Nunn, has been appointed as acting Dean of Southwark.