The eastern end of Tooley Street was closed for much of Friday morning after a cyclist was seriously injured in a collision with a lorry at the Tanner Street junction. 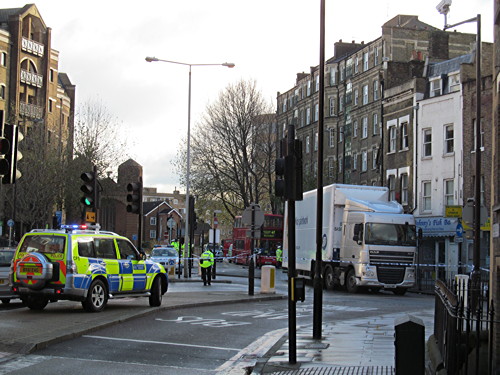 Police were called at 8.36am to reports of a collision between a Boots the chemist heavy goods vehicle and a cyclist.

A female cyclist was taken to hospital with leg injuries which are not through to be life-threatening.

The London Air Ambulance landed in the playground of St Michael's Catholic College.

No arrests have been made and the police are continuing to investigate the collision.

In March 2011 cyclist David Poblet was killed at the same location.

The junction is due to be remodelled as part of Cycle Superhighway CS4 which will link Woolwich with London Bridge. In July Transport for London listed the intersection on its table of the top 100 junctions to be assessed for cycle safety improvements.

The collision comes just five days after the first anniversary of the death of Ellie Carey in nearby Tower Bridge Road.