Eileen Gamblin, caterer at Christ Church Southwark in Blackfriars Road for 44 years, has died at the age of 88. 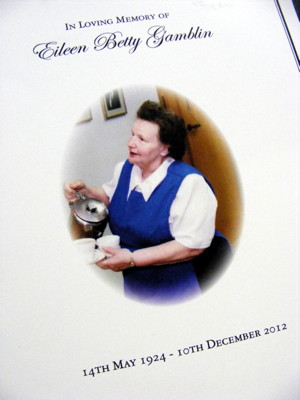 Hundreds of people who have attended events, meetings and functions at Christ Church will have known Eileen.

Her death came early on Monday 10 December which was almost a year to the day after she retired from her catering business based at the John Marshall Hall.

The funeral was on Friday afternoon at Lambeth Cemetery where the service was led by former Christ Church rector Canon Peter Challen. Eileen was a lifelong Lambeth resident.

The chapel was packed with family, friends, representatives of Christ Church and others associated with the building.

Tributes were paid by Eileen's son Rod and grandson Nathan who recalled being asked to help with many receptions and lunches held at the John Marshall Hall.

Rod recalled that his mother always put John Marshall Hall and its functions first. At first her grandchildren thought it was her home.

Nathan claimed: "We were catering from the age of 0."

Nathan also reflected that it had been interesting to have seen the hall featured in Archbishop Rowan Williams' final television broadcast.

"My Nan would have been proud to have had her kitchen 'on the telly'."

Eileen catered for many South London Industrial Mission and Southwark Ordination Course events when both organisations were based at the church.

Music at the service included On the street where you live by Vic Damone and Tom Jones' My Mother's Eyes.

Vera Lynn's We'll meet again was played before the committal.

Following the service, mourners walked to the burial plot at the far end of the cemetery where flowers were laid on the ground.

• Five years ago Eileen served teas at the tenth birthday celebrations for this website.