There was a champagne toast to Eileen Gamblin as she stepped down from her catering role at Christ Church in Blackfriars Road after 44 years. 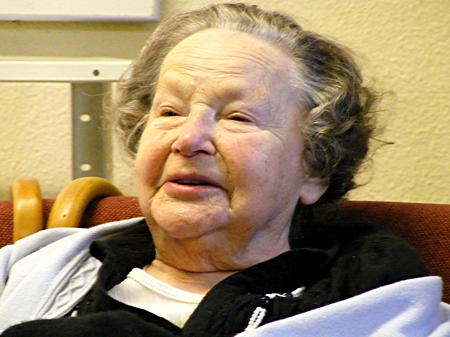 Eileen Gamblin at the party on Wednesday

A presentation was made to Eileen on Wednesday morning in the church's Vaughan Room where she had often supplied and laid out food for meetings and receptions.

Her son Rod recalled that his mother once catered for eight wedding receptions in a single day.

At Christ Church, Eileen did not only have wedding parties to look after. Based at the church in her early days were both the South London Industrial Mission and the Southwark Ordination Course.

The retired bookbinders reunion every January and an old girls' school reunion in the summer were among other repeat bookings.

The most unusual was a breakfast visit every Derby Day by a party taking a break during a journey by open top bus to Epsom Downs.

Eileen also cooked and catered for special staff events organised by large offices in the parish including Sainsbury's headquarters which was next door to the churchyard.

In 2008 Eileen served tea and coffee at performances of SE1: The Play which was staged to celebrate the tenth anniversary of this website.

"Whatever we do is going to be inadequate to say thank you," said rector Tim Scott.

"Some might say we could have had a really big party inviting everyone you've known over the years. We would have been, I suspect, breaking fire regulations. I am sure we would have missed a lot of people."

Among those at the party which packed the room were people who work in the building today as well as representatives of both the congregation and Marshall's Charity.

The rector added that Eileen had made many people feel welcome and happy and he hoped that she would still very much feel part of Christ Church and able to worship there.

Also present was Canon Peter Challen who was rector when Eileen came to Christ Church Southwark shortly after the church was rebuilt.

"It has more or less been my home for so many years," said Eileen after being presented with flowers and gifts. "And I have met lots of nice people which I am very very grateful for."