Lambeth councillors have approved plans for a 19-storey, 1,000-bed student residence and private sixth-form college at the junction of Westminster Bridge Road and Lambeth Palace Road. 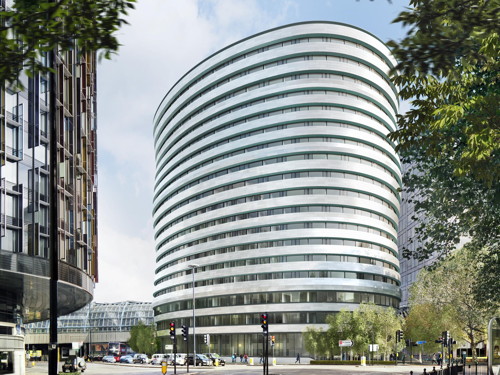 AHMM's proposed 19-storey college and student residence: "an alien object with no contextuality" according to English Heritage 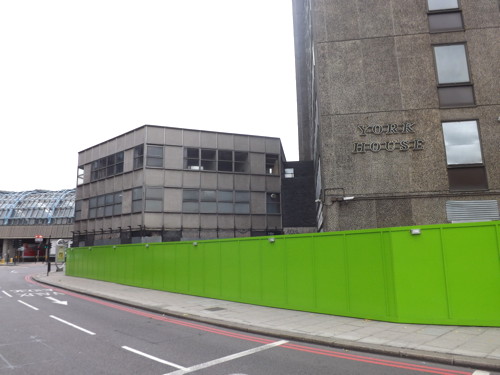 The site, currently occupied by York House and the former Florence Nightingale pub, will be redeveloped by Urbanest who recently acquired the leasehold from Delancey. The freeholder is Guy's and St Thomas' Charity.

A 16-storey office block called Westminster Place was previously proposed for the site.

Alpha Plus Group will establish and operate the school – DLD College London – which will have capacity for up to 700 pupils and will provide specialist teaching in science, IT, art, music and drama. It will have use of 200 of the bedrooms to accommodate pupils as boarders.

The developers hope to complete the new building in time for the start of the 2015/16 academic year.

The scheme includes a swimming pool which will be made available for use by local schools during the daytime.

"We are delighted to get a resolution to grant planning permission from Lambeth Council to deliver this world class student accommodation-led scheme in such an impressive location," said Johnny Manns from Urbanest.

"The mix of student residential, business, education and leisure uses all on one site will provide a welcome boost to the local economy and deliver an important element of the wider regeneration of the Waterloo area."

"DLD College has a heritage stretching back over 80 years in London and our new setting in Lambeth will create London's first bespoke sixth-form boarding college with top quality, en-suite accommodation on the site."

The scheme has also won backing from Lambeth's Labour administration.

"This is exactly the type of mixed development we welcome in the borough that creates jobs, housing and affordable space for small start-up companies," said Cllr Jackie Meldrum, deputy leader of the council.

"The redevelopment of this run-down and neglected site will benefit local residents, entrepreneurs and help boost Waterloo as a major location for higher education."

However, English Heritage made a strong objection to the proposal.

"The current proposals fail to respond to their immediate environs," said EH in a written submission to the council.

"The strong horizontal banding and white cladding are at odds with the historic environment that surrounds it.

"The architecture of the proposed building is in danger of appearing as a great amorphous mass, an alien object with no contextuality to its surroundings."

EH claims that the proposed building would damage views of the Palace of Westminster from Parliament Square.

Planning applications committee member Cllr Brian Palmer was also sceptical about the undulating banding of the facade: "Unfortunately when buildings are too subtle in this regard they just end up looking wonky," he said.

Cllr Jennifer Brathwaite praised the architects for "a dynamic design which adds to – rather than detracts from – the setting in which it sits."

The committee was addressed by Ted Inman, chief executive of South Bank Employers' Group, who called for more flexibility in the spending of section 106 money on local public realm projects.

Committee chair Cllr Diana Morris said: "I think everyone will be very happy to see something happen on this site.

"We've been round the houses several times at the committee looking at schemes and it will be marvellous to see something happening."