A property developer has reversed its decision to call a new 16-storey office block in Waterloo 'Westminster Place' after locals insisted its name should reflect the history of North Lambeth. 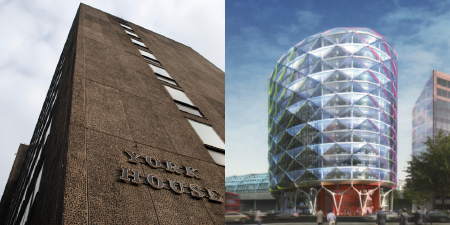 Delancey has submitted a planning application for a 16-storey block to replace York House and the former Florence Nightingale pub at the junction of Lambeth Palace Road and Westminster Bridge Road.

Designed by Sheppard Robson, the block will have a curved steel and glass frontage and will accommodate approximately 3,000 workers.

When plans were presented to a recent meeting of the South Bank Forum, locals led by Vauxhall MP Kate Hoey strenuously objected to the building's proposed Westminster Place name.

Although the upper floors of the new building will enjoy views of the Palace of Westminster, it was felt that a name for the building that related in some way to North Lambeth and Waterloo could be found.

Now Delancey's Mark Enderby is inviting local residents to contact him ([email protected]) with ideas for a new name for the building.

The scheme is due to be considered by Lambeth Council's planning applications committee later this month.

A marketing suite has already opened on the site as the developers seek a tenant for the building.

Last year it was rumoured that the site was among those considered by Rupert Murdoch's News International as the new headquarters for The Times and The Sun when the firm moves out of its Wapping offices.

What do you think the building should be called?