As Southwark Council prepares to sell its car pound site at Mandela Way, the borough's Liberal Democrat opposition group has suggested that the land should be used for a new primary school. 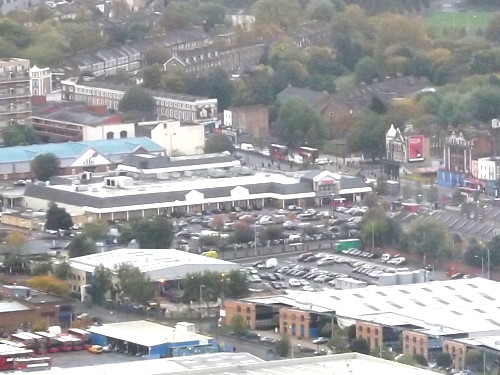 The car pound site seen from the Shard

In a letter to Cllr Fiona Colley, the council's cabinet member for regeneration and corporate strategy, Lib Dem finance spokesman Cllr Tim McNally has described the shortage of primary school places in north Southwark as a "ticking time-bomb".

Cllr McNally has condemned the planned sale of the car pound at the eastern end of Mandela Way as "a huge missed opportunity and lack of vision by the council, which seems preoccupied with selling off every available piece of public land".

He added: "Given the serious shortage of primary school places in the north of the borough, particularly in the area surrounding Mandela Way, I would be grateful to be informed of the steps the council has taken to asses the potential to use the site as the location of a new school.

"The neighbouring schools in the area have repeatedly raised concerns about oversubscription and the council's own reports indicate that a further 6.5-8 forms of entry in the north east of the borough are needed by September 2016 – of which 3-4.5 forms are needed as soon as September 2014.

"This site would be suitable for a primary school with three forms of entry ie 90 pupils per year.

"The site would require a change of use but it is otherwise ideal in terms of size and location – offering opportunities akin to other existing primary school sites in the borough.

"I therefore call on the council to immediately halt plans to dispose of this valuable public asset and to engage interested new school providers and local parents in a consultation on the future of the site, particularly given its proximity to the facilities of the Walworth Academy and the very high public transport accessibility offered by the Old Kent Road."

Southwark's Labour cabinet had been due to agree the disposal of the car pound at its meeting last month, but the item was withdrawn from the agenda at short notice.

It is not clear where the car pound – operated by the council's parking contractor APCOA – would be relocated to if the sale goes ahead.