EmploySE1 has extended its catchment area from Southwark into the Borough of Lambeth to include both Waterloo and Vauxhall. 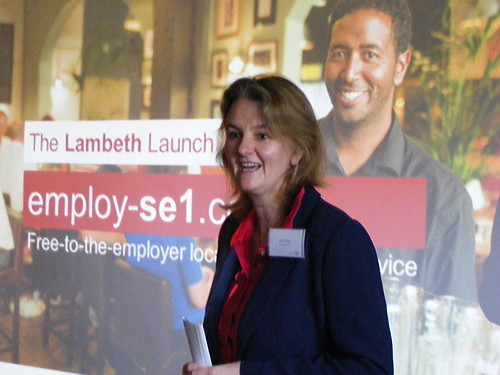 EmploySE1 was launched two years ago in Southwark to help firms in the north of the borough recruit local staff.

Now the service – which allows employers to advertise vacancies free of charge – has been expanded to cover the borough of Lambeth.

"We are all about trying to break down this rather artificial boundary," said Waterloo Quarter BID chief executive Helen Santer who pointed out that her business improvement district is one of only two in the country to be cross-borough.

She was speaking during the Lambeth launch of EmploySE1 at the Novotel London Waterloo in Lambeth Road on Wednesday morning. It was attended by representatives of Better Bankside, Team London Bridge and Vauxhall One BIDs as well as local firms.

"Not only are people recruiting at the moment – contrary to national trends – but they are very interested in recruiting locally," stressed Helen Santer. "Our members see the benefits of employing people from the local area."

"This is a brokerage service that links all your available job opportunities with a partnership of local agencies who have large numbers of local unemployed people on their books. It's as simple as that. You register online."

She said that the agencies were signed up to a charter mark and the free service had seen real success.

Guests were welcomed, on behalf of Vauxhall One BID, by Claire Hawk of Walker Books in Vauxhall Walk.