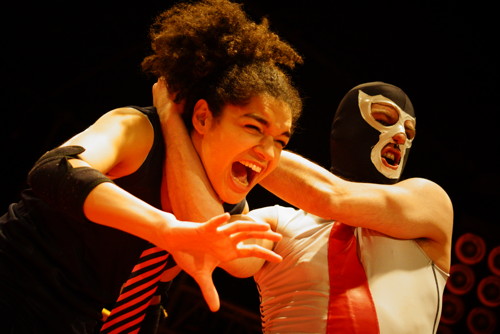 The first night audience included Juliet Alderdice and Tom Wilson who founded Southwark Playhouse twenty years ago in Southwark Bridge Road. When their lease ran out in 2007 a new location was found next to the Shipwrights Arms in Tooley Street.

Now the rebuilding of London Bridge Station has brought the playhouse south to the former Autocar garage in Newington Causeway. The flexible building was recently used by the Elephant & Castle's resident artist Reuben Powell and it now provides two performance spaces. But this is not the Elephant & Castle's first significant theatre for it was at Newington, or the Elephant, that early Elizabethan theatre prospered ahead of the Globe.

The old garage, almost but not quite under the railway line, is a perfect venue for a wrestling theme play with 'a live DJ'. It may be a slow burning story about a female wrestler but it is told at a fast pace. This is a two hour show including interval.

The audience sits round a ring as if waiting for an evening of boxing or wrestling in any south of the river cavern. Claire Luckham, whose Blackbird was staged at Southwark Playhouse in 2003, has added some new scenes with mentions of the Elephant for this run.

Mark Rice-Oxley is never off stage, or out of the ring, as the Ref. He is as versatile and capable of Mexican Lucha Libre wrestling as the rest of the extemely fit cast which is required to wrestle, sing solo and dance.

Female wrestler sensation Tanzi is played by Olivia Onyehara and her chauvinist wrestler husband Dean by Kazeem Tosin. Tanzi and Dean are eventually pitted against each other for the ‘fight of the decade’.

The show easily wins the vital audience participation of applause and groans. There is an occasional air of menace but the physical theatre stops just short of being far too realistic.

The director is the playhouse's former artistic director Ellie Jones who was responsible for A Christmas Carol.

It was a risk to choose a wrestling entertainment with music and song for the theatre's relaunch but those wanting to experience the latest Southwark Playhouse will not be disappointed.