Midwife’s love of the South Bank reflected in art installation

A St Thomas' midwife - who got married, went into labour and watched her children take their first steps in the Royal Festival Hall - has made her story into an interactive art installation. 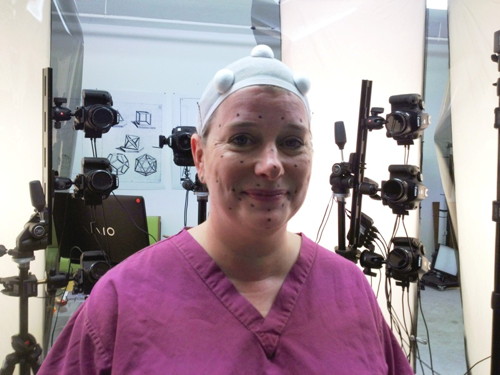 Judith Lyons, 46, is sharing her life with Atticus, a 'digital mirror' that allows visitors to see the life of a person of another age, race or gender reflected back at them.

Judith, who has worked as a midwife at St Thomas' Hospital for 9 years, says: "I'm so passionate about the South Bank and Southbank Centre; I've lived here for 27 years and they've been a major part of mine and my family's life so I was eager to be involved with the project.

"I got married in Southbank Centre's Royal Festival Hall in 2011 and all our guests said it was the best wedding they'd ever been to.

"Working at St Thomas' is not like working at any other hospital. It is part of an iconic setting and community, I feel very lucky to be able to work in such special surroundings."

Judith is of three SE1 'neighbours' who have come together to form Atticus as part of Southbank Centre's Festival of Neighbourhood. She is joined by a member of Southbank Centre staff and a representative of the SE1 United youth organisation.

"I knew I wanted someone from St Thomas' Hospital to participate as it's such a close and well loved neighbour," said Atticus's creator James Cowdery, head of digital engagement at Southbank Centre.

"I never imagined I'd find someone as involved with the centre and its community as Judith.

"It's been fascinating to explore how digital technology can tell the story of our neighbours and celebrate their contribution to Southbank Centre."

Atticus is on display until 8 September on level 2 of the Royal Festival Hall.