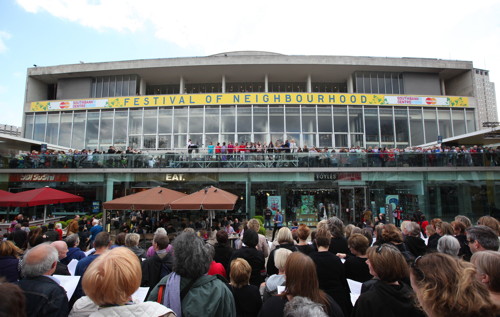 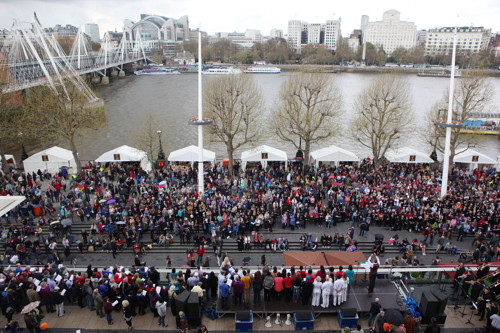 "Last summer Southbank Centre 'hosted the world' in order to celebrate the ideals of the Olympics and Paralympics," said artistic director Jude Kelly.

"This year we focus on neighbourhoods; both our own – telling the story of Southbank Centre as a neighbourhood, a place of intimacy, friendship and community – and others farther afield.

"Festival of Neighbourhood will be a space for artists and visitors to ask what it means to live side by side and will explore if, why and how we want to support community endeavours and a sense of belonging.

"This exploration will be made possible through collaboration with hundreds of artists and organisations and thousands of participants of all ages.

"I'd like to thank all the partners who have this possible, in particular MasterCard for generously supporting the festival."

The festival began this weekend when moron than 1500 singers gathered on the riverside terraces outside the Royal Festival Hall to sing Jerusalem, Waterloo Sunset and Come ye Sons of Art.

From 1 June a range of open-air installations will be unveiled as part of the Festival of Neighbourhood, including a fruit and veg stall by The Cherry Berry Company, a traditional pie shop brought to Southbank Centre by Hartland Pies and designed by RIBA students, and the community-based cycling cafe Look Mum No Hands!, in addition to weekly markets.

The riverside Queen's Walk in front of the Royal Festival Hall will see the return of the popular urban beach – this year taking the shape of a miniature town in the sand – and be home to allotments created from reclaimed wood and windows in collaboration with Wayward Plants.

An allotment project, Queen's Walk Window Gardens, will provide opportunities for volunteers and communities to be involved in building and tending to plants.

More areas of the site will be blooming with flowers and greenery and provide volunteering opportunities: the Queen Elizabeth Hall roof plants, created in partnership with the Eden Project and cared for by Providence Row, will be expanded to include a shade garden; the Festival Terrace connecting Waterloo with the river will be lined with more than 20 mature fruit trees in a collaboration with the National Trust; there will a trail of 60 wheelbarrows planted as mini gardens; and on the Riverside Terrace there will be a herb garden, with its produce being used in the food served by the Royal Festival's Hall's cafe run by Company of Cooks.

An exhibition dedicated to Lambeth, created in collaboration with The Building Exploratory, opens in the Spirit Level of Royal Festival Hall on 25 May.

Special weekends celebrating Lambeth and Brixton (13-14 July) and Deptford (27–28 July), as well as Vauxhall in collaboration with Duckie (10–11 August) will form part of the lineup.

Looking further afield the festival will also include a weekend dedicated to the historic neighbourhood and UNESCO World Heritage site of Pelourinho in the city of Salvador, Bahia, which will bring a carnival atmosphere to the South Bank with Afro-Brazilian dancing and an all female drumming group (17–18 August).

Celebrating the 75th birthday of The Beano, Festival Village in the undercroft of the Queen Elizabeth Hall will be transformed into Beanotown – an imaginary neighbourhood – in a collaboration of The Beano publisher DC Thomson and HemingwayDesign.

The fictional home town of Dennis the Menace will feature a museum showcasing, for the very first time, The Beano's archive and previously untold stories dating back to wartime Britain.

The festival will culminate in the One Bowl Feast (7-8 September), a weekend of sharing food, dancing and making merry curated by Clare Patey, the artist responsible for the popular Feast on the Bridge previously held on Southwark Bridge as part of The Mayor's Thames Festival.