New signs to deter pushy door-to-door salespeople and rogue traders have been installed at Collinson Court in Great Suffolk Street. 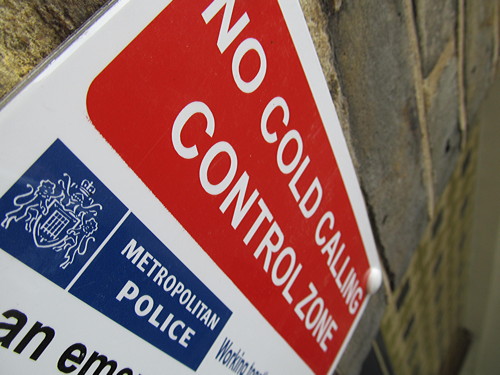 Five years ago a 'No Cold Calling Control Zone' was established on the Scovell Estate which has a large number of elderly residents.

Information packs will be issued to every resident within the zone, which includes signage that can be displayed on homes and lampposts and also information on how to report a breach of the zone.

The zone also includes a nominated neighbour scheme. Residents doubting the authenticity of a salesperson or trader will be able to refer them to a 'nominated neighbour' to be vetted before being allowed access to a resident's home.

"The Southwark No Cold Calling Control Zones have been a great success so far with many residents now experiencing a drop in the number of cold callers to their homes," said Cllr Richard Livingstone, cabinet member for community safety.

"What's been really encouraging is the feeling of empowerment the zones give our residents. They now have the support they need from the council, the police and their local community to be able to protect themselves from potential rogue traders.

"They are also armed with information on how to report potentially criminal activity. We are more than happy to hear from other communities who feel that a zone would be beneficial to residents."

Denise Philbey, chair of the Collinson Court and Great Suffolk Street Tenants' and Residents' Association, said: "We're very keen to set up the NCCCZ on our estate. An overwhelming number of residents were also in support of the scheme and we are pleased that it is now operational and hopefully it will make a big difference.

"We would like to thank the City of London and Southwark Trading Standards for all their help and support in setting up the NCCCZ."