Residents of the Scovell Estate have signed up to a scheme to combat bogus callers, high pressure salespeople, and burglars who operate by distracting householders on the doorstep. 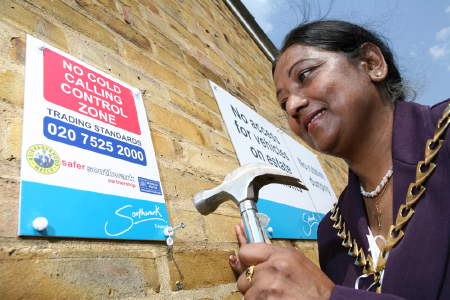 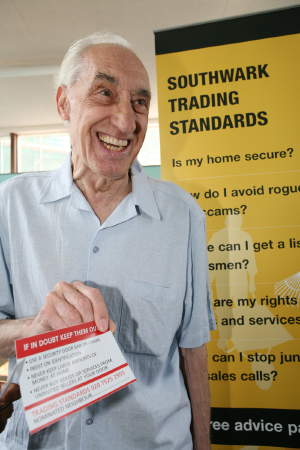 The estate is now an official "No Cold Calling Control Zone" (NCCCZ) in an attempt to safeguard vulnerable members of the community from crime associated with doorstep selling.

The zone was launched on Thursday by the new Mayor of Southwark, Cllr Eliza Mann, at the Queensborough Community Centre on the Scovell Estate.

Lil Morgan, 79, is a Scovell resident who was a victim of an attempted distraction burglary. Mrs Morgan, who has lived in her home for nearly 30 years, said: "I was duped into letting two men into my flat. They said they had come to sort out a problem with the water in the block.

"I didn't ask for any identification, but very soon after I let one of them into my flat, I just felt something wasn't right, and asked him to leave. Once he'd left I realised that his accomplice had ransacked my bedroom. The whole thing was very upsetting and left me feeling very nervous."

Southwark Council says that there is clear evidence of a link between doorstep crime and rogue traders. There were 123 offences of distraction burglary in the borough of Southwark last year.

"We need to do everything possible to protect people from unscrupulous individuals who pose as door-to-door sellers in order to steal from them," says Cllr Paul Kyriacou, executive member for community safety.

"Elderly and vulnerable victims of these types of crime are often traumatised by the events and left fearful of every caller to their home. The NCCCZ is an excellent initiative which we hope will deter criminals from operating and leave potential victims feeling a bit safer within their own homes."

The NCCCZ also includes a "Nominated Neighbour Scheme". This will allow residents to refer callers to a nominated neighbour to establish their validity before being allowed to gain entry to their homes. Following a six-month evaluation of the pilot scheme, the programme will be considered across the borough.

Each resident of the Scovell Estate has been offered advice on home security and what to do if an unwanted trader calls. In addition, each resident has been given a pack including stickers indicating their refusal to buy goods from doorstep sellers and signs have gone up in the participating area, indicating that it had chosen to have NCCCZ status.