Upper Ground closure extended till March 2014 'due to high winds'

The closure of the eastern end of Upper Ground for building works at Sea Containers House - originally due to last 10 months - will last at least 16 months. 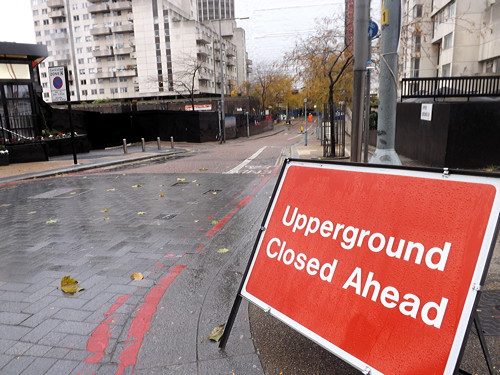 The closure of the eastern end of Upper Ground began in November 2012 and was scheduled to last until September this year.

The street is part of National Cycle Network route 4 and is normally used by hundreds of cyclists during rush hour.

More than a year on, the road remains shut and now the developers behind the refurbishment and extension of Sea Containers House have revealed that the closure will continue until the end of March 2014.

In a message published in the d-Brief newsletter, the developers say that "... the programme of works at Sea Containers has been delayed by high winds affecting the amount of work that could be completed using the cranes.

"Although the programme did have extra time built in to allow for bad weather conditions, it has been much windier than in a normal year and around 500 crane hours have been lost.

"The project has looked at a number of ways to try to reopen the road as swiftly as possible. However, there is still work to be completed on the building, deliveries are still being made and the road surface needs replacing.

"Therefore, Southwark Council has agreed to extend the road closure until the end of March 2014.

"Sea Containers apologise for this unexpected delay and thank their neighbours for their ongoing patience."

• Work has begun on the installation of new high-voltage cables from the UK Power Networks substation at the former Bankside Power Station to provide electricity to the new luxury apartments in the South Bank Tower. The cables will run along Hopton Street, Southwark Street, Stamford Street and Hatfields.