Southwark Council will shut its Tooley Street headquarters for the day during Christmas week and has donated the money saved to a local foodbank. 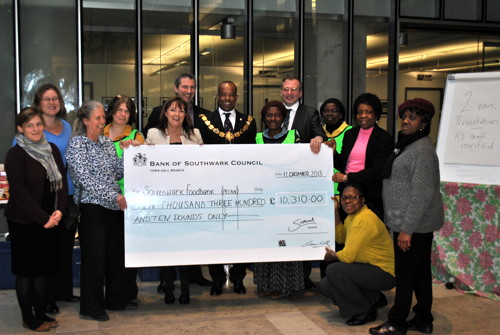 Cllr Abdul Mohamed, Mayor of Southwark, hands over the cheque to Southwark Foodbank

The council has decided not to open its headquarters at 160 Tooley Street on Friday 27 December and has given a cheque for £10,310 – the amount it believes it will save – to Southwark Foodbank.

Presenting the cheque to Pecan – the Peckham-based charity which runs the food bank – Southwark Council chief executive Eleanor Kelly said: "We know that things have got tougher and tougher for people this year and we want to say thank you for all you do.

"This is a big gesture but the council also wants to keep supporting the food bank in smaller ways throughout the year, with regular donations from staff."

Pecan's executive director Chris Price said: "Thank you, this is an amazing gift, and so unexpected. The money will have a real impact and allow us to provide Christmas meals to local people, which we didn't think we could afford to do.

"Christmas Day is such an important day, and having a turkey on the table will give many Southwark children a happy memory of this Christmas.

"They will start the new year with renewed hope rather than on a depressing note. I'd like to say thank you to Southwark and all its staff who we work with throughout the year."

In addition to the cheque, the foodbank was presented with a vast array of goods including Christmas puddings and mince pies that had been donated by council staff. This was the 4th contrbution that staff have made to the food bank in 2013.

Cllr Richard Livingstone, cabinet member for finance and resources, said: "When many people are wondering which toy or gadget to buy their loved ones, it's humbling to think that for many families across the country, the only dilemma this Christmas will be how to put a hot meal on the table.

"We will continue to find ways to support the foodbank because we know how hard things are for many people in Southwark, and what a vital lifeline the food bank provides."

• Essential council services will be unaffected by the office closure on 27 December as staff will work from other premises.