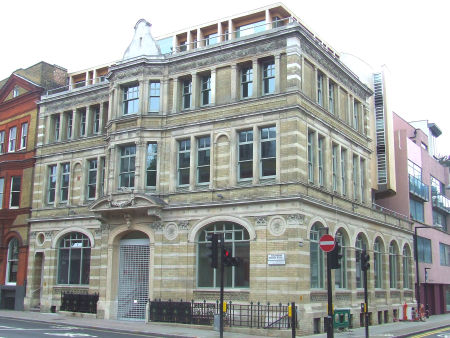 The media training centre – which opened in 2009 – featured accessible TV and radio studios, edit suites and a private cinema.

It occupied a building at the corner of Southwark Bridge Road which was built as a public library and during the 1980s and 1990s was used as the Borough Community Centre.

Its conversion into a media training centre was originally linked to the Elephant & Castle regeneration programme. Ł5.5 million of public money was spent on the refurbishment of the building to a design by Architype architects.

First announced in 2004, the centre was originally intended to provide skills training for local people to work in the creative industries but following the failed launch of the Elephant & Castle Trust it was leased to Leonard Cheshire Disability who ran a more narrowly focused range of courses focused on disabled and disadvantaged people.

"We have reluctantly had to close our Ability Media Centre after funding was withdrawn for several projects on the site," said a Leonard Cheshire Disability spokeswoman this week.

"It has been a difficult decision but it would not have been financially viable to continue running the centre.

"The other services including IT, employment and information, advice and guidance that ran from the Ability Media Centre are still continuing and are being delivered from a range of locations across London.

"However we remain committed to continuing our work to support disabled people gain a variety of skills to improve their employment opportunities.

"The training and support provided at the Ability Media Centre has made a real difference to many disabled people by enabling them to gain experience and work in media."

Southwark Council said it learnt of Leonard Cheshire's intention to exercise a break clause in its lease at the beginning of this year.

Meeting rooms on the ground floor of the building are used by several local organisations for public meetings.

"There should be minimum disruption to community services," said a council spokeswoman. "The rooms used by community groups have been separated from those vacated by LCD and they will still be accessible."

She confirmed that the council plans to let the rest of the building: "An agent has been appointed with a view to finding new tenants for the vacated offices in the New Year."

Cathedrals ward councillor Adele Morris (Lib Dem) said: "Some months ago I had discussions with council officers about the future of this former community centre and made it expressly clear to them that any plans for the site must have the backing of local people.

"I am therefore disappointed to learn that despite promising to come back with options they have gone ahead and put the site with an agent to re-let it.

"One of the suggestions was to look at whether the community space could be separated out and again I am disappointed that this has apparently been enacted without any further consultation."

"This shows that the council continues to ignore the views of the Bankside community and its elected representatives, despite there being an emerging neighbourhood plan for the area."

As recently as last year an independent report commissioned by Southwark Council recommended that rental income from the building should be used to fund community projects at the Elephant & Castle.