Imperial War Museum to shut for first half of 2014

Just six months after reopening, the Imperial War Museum is to close the doors of its Lambeth Road building for the first half of 2014. 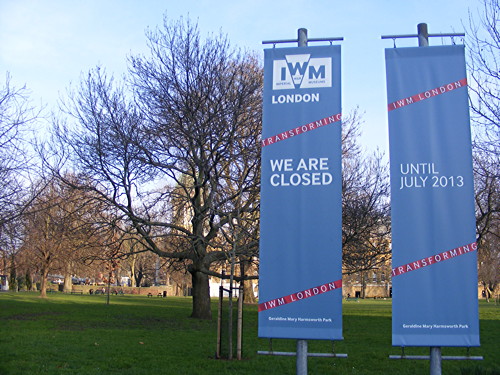 Notices announcing the closure of the museum in spring 2013. Similar signs will now be erected in 2014 as well.

The museum is currently carrying out a major refurbishment project to prepare for the World War I centenary commemorations which begin next summer.

IWM London closed for the first half of 2013 before reopening on a limited basis in July this year.

However the museum says that it has now "widened the scope of the building works" due to unexpected discoveries and will shut its doors to visitors at the end of the Christmas holiday period.

"After assessing the impact of the discoveries, and the scope of the remaining works on visitors and their experiences of the museum, a decision has been made to temporarily close IWM London from 6 January until the transformed museum opens in July 2014," said a spokeswoman.

"The closure period will mean that IWM can concentrate on construction works in areas that are currently accessible to visitors."