Passengers at Blackfriars Station on Wednesday morning were offered a free cup of tea drawn from Britain's biggest tea cup to celebrate the launch of the world's largest solar bridge. 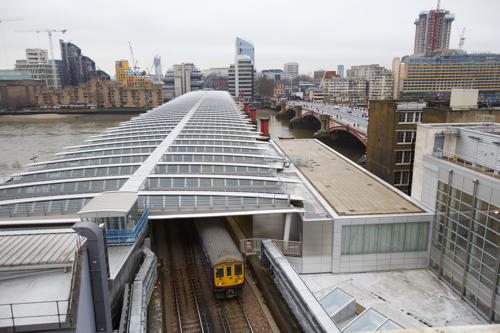 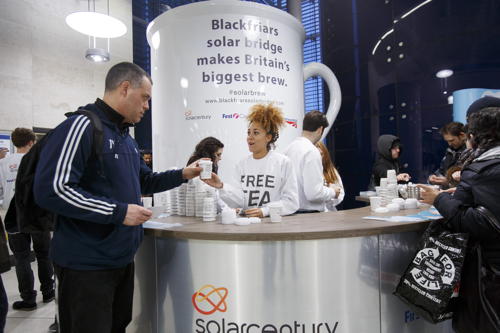 Blackfriars Station has been rebuilt as part of the Thameslink Programme and now has entrances on both sides of the river.

The 4,400 photovoltaic panels cover the roof of the station and produce enough energy to make almost 80,000 cups of tea a day.

London's longest array provides up to half of the station's energy, reducing its CO2 emissions by an estimated 511 tonnes per year – equivalent to approximately 89,000 car journeys.

Screens have been installed close to the station's ticket barriers to allow passengers to monitor the performance of the solar panels.

"The dramatic transformation of Blackfriars station from a small and cramped station to a modern landmark is typical of how we are enhancing one of Europe's busiest rail routes – using smart, sustainable technology to reduce the cost of running the railway at the same time as giving passengers the longer, more frequent trains that are so desperately needed," said Simon Kirby, managing director of Network Rail infrastructure projects."

"The distinctive roof has also turned our station into an iconic landmark visible for miles along the River Thames."

The installation of the 6000m2 of PV panels was carried out by Solarcentury, a company until recently based in Lower Marsh.