A petition calling for new pedestrian crossings on Borough High Street has been delivered to City Hall. 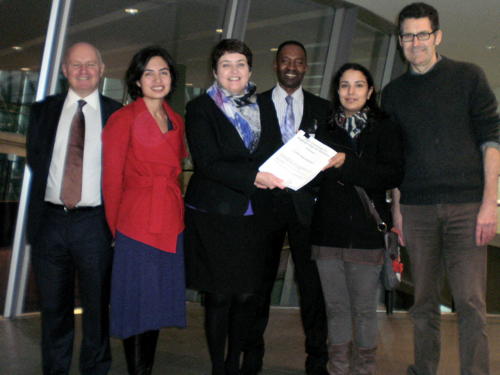 Around 1,500 people signed the petition which was organised by SE1 Safe Roads, Boroughbabies and Southwark Living Streets.

Representatives of the campaign visited City Hall last week to hand the petition to Val Shawcross, London Assembly member for Lambeth and Southwark, in the company of Cllr Barrie Hargrove, Southwark cabinet member for transport, environment and recycling.

Southwark Council's Labour leadership recently promised to fund two pelican crossings on Borough High Street within the next year – but the next step is to secure Transport for London's backing for the proposals.

One of the two proposed crossings – outside St George the Martyr church – is on the section of Borough High Street controlled by TfL – whilst the junction at Trinity Street is part of Southwark Council's own highways network.

Val Shawcross AM said: "This petition is timely as we are currently looking at pedestrian safety with the Assembly transport committee.

"This petition has clearly had a lot of interest; people really feel they are taking their life in their hands when trying to cross Borough High Street and those who collected the signatures told me that people were queuing up to sign it.

"I will now pass this to the Mayor in his role as chair of Transport for London."

Speaking at last week's Borough, Bankside & Walworth Community Council meeting, Chaucer ward Lib Dem councillor Poddy Clark said: "It's really important that the council has put in funding for this, but above all we need to put pressure on TfL because without TfL saying 'yes', it will not happen."