Transport for London says it will re-examine the case for new pedestrian lights at the crossing of Borough High Street in front of St George the Martyr church after local campaigners held another protest. 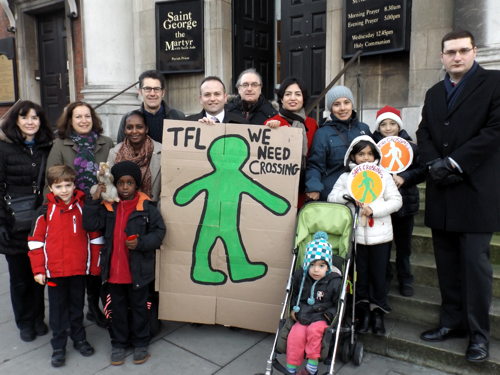 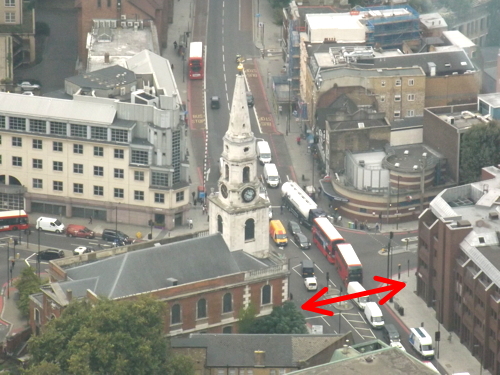 The disputed crossing is marked with a red arrow

Members of the SE1 Safe Roads campaign, Southwark Living Streets and Boroughbabies gathered with Val Shawcross AM and local councillors on Tuesday morning to renew their calls for improvements to the crossing which currently has no pedestrian lights.

A year ago the campaigners staged a 'day of action' calling for upgraded crossings on Borough High Street at the Marshalsea Road and Great Suffolk Street / Trinity Street junctions.

In January Southwark Council leader Peter John gave "a commitment that this authority will deliver those crossings within the next 12 months".

Nearly a year later, neither crossing has been upgraded, though there are firm plans for pedestrian lights at the Great Suffolk Street / Trinity Street intersection as part of the Quietway cycle route works scheduled for next spring.

On the Marshalsea Road junction, campaigner Victoria Diamond accused Transport for London of "dragging their heels".

"The last I heard from them they were claiming that it's a safe enough crossing and it didn't need any alterations," she said.

"We want to prevent accidents and not react to them."

Cllr Mark Williams – cabinet member for regeneration, transport and planning – said that the council would keep up the pressure on Transport for London until pedestrian lights are added to the crossing.

"We've offered to pay for this through section 106 funding and we'll continue to push – working with local parents and local groups – to get this crossing in place."

Cllr Williams denied that that the leader's promise to upgrade the crossing – which isn't within the council's power – was a cynical gimmick in the run-up to last May's local elections.

"It's an extremely important issue and we'll continue to push TfL."

Transport for London says it is open to further discussion with the council, particularly if funds from local developments can be made available.

Nigel Hardy, head of project sponsorship for road space management at TfL, told the SE1 website: "We are aware of calls by local residents for additional pedestrian facilities at the junction of Borough High Street and Marshalsea Road and plan to see whether any further improvements could be made at this location during the next financial year."