A London lifeboat crew was called to a 'ghost ship' drifting on the River Thames on Tuesday afternoon. 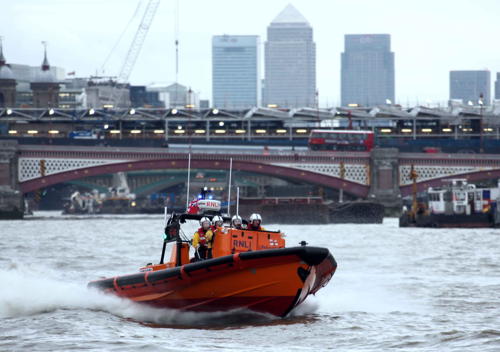 The boat had been spotted drifting under Hungerford Bridge just after 3pm on Tuesday.

The Royal National Lifeboat Institution (RNLI) crew arrived to find an empty cabin cruiser in a poor condition with no signs of life aboard.

"It's not often you find an empty boat drifting in the middle of London with no signs of life aboard – it was a bit like finding a ghost ship in the city," said
Keith Cima, Tower RNLI lifeboat station helmsman.

"We set up a tow and took the empty vessel to a nearby Port of London Authority (PLA) barge where it was securely moored.'

Another vessel approached the RNLI lifeboat and the mystery of the drifting cabin cruiser was solved.

Keith explained: "The skipper of the vessel that came alongside us explained he had been towing the empty boat up from Brightlingsea when its tow had broken in London, setting it adrift.

"The skipper was given advice by the RNLI crew on towing, and after a conversation with the PLA by telephone he was allowed to proceed on his way."

The RNLI crew then returned to Tower Lifeboat station which is located next to Waterloo Bridge.

The RNLI relies on public donations to carry out its lifesaving work in the capital and will be raising funds during London Lifeboat Week between 28 April and 4 May.

The charity is looking for volunteers to help with collections at railway stations including London Bridge Station and Waterloo Station – details at http://rnli.org/londonlifeboats