A London lifeboat crew was called into action on Wednesday evening after receiving reports of a person in the water close to HMS Belfast. 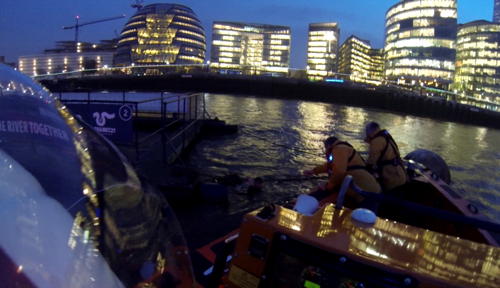 The Royal National Lifeboat Institution (RNLI) crew from Tower lifeboat station raced to the rescue and saved the man who was clinging precariously to a barge in the middle of the River Thames.

After receiving a call from London Coastguard at a minute past 8pm the lifeboat crew were quickly on scene.

A Thames Clippers passenger boat was in the vicinity and able to indicate that the man was clinging to the upstream side of a driftwood collecting barge, a permanently moored vessel which filters rubbish and debris floating on the surface of the Thames.

"The barge's bow faces the flow of tide and the rubbish is filtered through a basket which collects it," said lifeboat helmsman Chris Walker.

"The casualty was in a very precarious position indeed. There was a 2-3 knot tide running at the time of the call, had it been a faster spring tide, he could very easily have been sucked under or even into the collecting hopper where among the rubbish and debris it would have been very hard to get him out.

"I managed to helm the lifeboat close enough to the overhanging edge of the barge, so that my colleagues Stuart Morrison and Stephen Wheatley could grab hold of him.

"While we were assessing his condition, he suggested that there was someone else in the water. So after quickly handing him over to a waiting ambulance at St Katharine Docks, we were joined by the police boat, London Fire brigade boat and a police helicopter in an extensive search of the area."

After a thorough search, and further investigation into the cause of the incident, the rescue services were confident that there was no second person missing. Nothing was found and the search was called off at 8.40pm.