Rushworth Street closed due to fears over unsafe wall

Part of Rushworth Street was sealed off by police on Thursday night due to concerns about the safety of a wall on a demolition site. 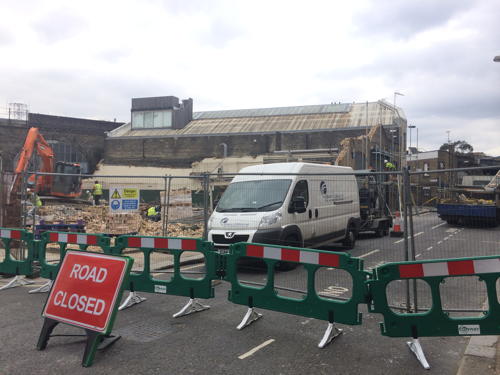 Contractors are currently demolishing the former Martin-Lavell newspaper warehouse at the junction of Rushworth Street and King's Bench Street.

The road was closed by police on Thursday due to fears over the safety of an unsupported brick wall.

"We have assessed the building and taken measures to ensure it is not a danger to the public.

"The site's contractors are working towards a permanent solution and the highway will remain closed as long as is necessary."

On Friday scaffolding was erected to support the wall and barriers were plead across the road.

Plans to demolish the warehouse have been in hand for at least five years. In 2010 the building won a brief reprieve when a new conservation area was created, but consent for the demolition of the structure was granted a year later.