The National Theatre has applied for permission to relocate the statue of Sir Laurence Olivier from the South Bank riverside walkway to one of the raised terraces of the theatre building. 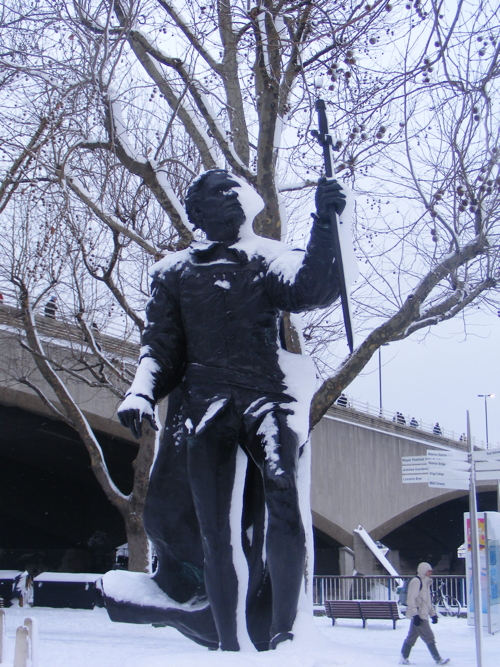 The statue covered in snow in 2009

Actor-director Sir Laurence was one of the founders of the National Theatre and its inaugural director during the company's years at The Old Vic before its purpose-built home was ready.

Angela Conner's statue of Sir Laurence as Hamlet was unveiled outside the NT in 2007 to mark the centenary of the actor's birth.

Now the National Theatre has applied to Lambeth Council for permission to relocate the statue from its present position "on a particularly busy crossroads of an increasingly busy thoroughfare" at the foot of Waterloo Bridge.

In its planning application the NT said: "It has been subject to graffiti on more than one occasion and damage to the sword on another, and though the sculpture is anchored into the granite plinth, we have become increasingly concerned about metal theft.

"We are therefore proposing to remove the sculpture from this somewhat cluttered corner and relocate it on the Olivier Stalls Terrace, currently under reconstruction to become the most welcoming and green space on our estate."

The application also notes that the terrace is locked from 11pm each night, "ensuring the kind of protection that is currently lacking".

Update: Soon after the publication of this article the National Theatre contacted us to say that they no longer intend to relocate the statue and will be submitting an amendment to their planning application currently under consideration by Lambeth Council